The tooth fairy comes to Switzerland 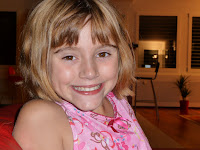 Carefully placed under a pillow of white
Lay one little tooth as she turned out the light;
Her eyes closed in slumber, a smile on her face,
Covered up to her chin with a quilt momma made.
Quietly hovering above her sweet head, A room full of fairies looked down on her bed,
Little gold bags were carried by some,
While others had wands that glowed like the sun. Each one had a job to fulfill in the night,
Some brought gold coins and others brought light;
Together they worked as they flitted about,
Replacing the tooth with some coins to be found. Their job was complete as she let out a sigh,
They floated to the ceiling way up high,
Out of the window and into the night,
The tooth fairies flew leaving behind such delight.
Coretta was having a lot of trouble eating her corn on the cob last night because one of her eye teeth was hanging there ready top fall out. Nick and I told her that she should try to get it out before she goes into the mountains for the next four days. Coretta came back a few minutes later with the tooth in hand.
She decided that she would write the tooth fairy a letter. She was a little concerned that the tooth fairy may not be able to find her all the way in Switzerland. That night she tucked her letter and her tooth safely underneath her pillow and went to sleep.
In the morning, her letter was still there, but she had left Coretta 10 francs. Coretta came to the conclusion that the tooth fairy could not read her letter since it wasn't in German!!