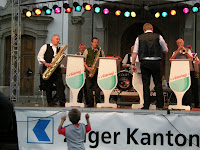 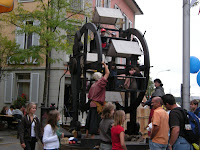 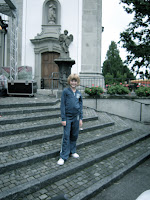 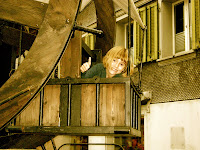 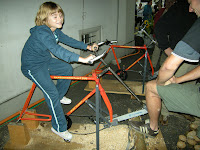 Today we went to the Cham Steht Kopf which is a birthday celebration for the village of Cham. It was to celebrate their 1105 birthday and there were many festivities.
I found this particular festival interesting because all the games were set back in time to the Medieval Ages, including the people running these games.
Some of the games they had were this wooden ferris wheel that was powered by hand, an egg breaking contest where you would throw solid steel balls at an egg balancing on a wooden stump and try to break it, and a bike with a saw at the end of it for cutting logs. Coretta tried all three of course.
They also had an old wooden press where they were making apple juice. Donkeys and roosters were on display, and several different live bands playing music from jazz, country, pop, to karaoke.

Although it started to rain, festivities here are never called off. They even still had the fireworks!! There also was a booth where nuns were selling anything from bath salts to knitted sweaters and all sorts of food from barbecue, thai, and bratwurst, and Coretta's favorite pomme frittes (fries).

Since Cham is only a couple of miles from our house, we took the bus down and then went over to our friend Bob's house for some more refreshments, snacks, and a game of Wii. Since Geno was acting up due to the fact it was past his bedtime, I took him home and opted to walk home in the rain. There is something aboout the rain here. It is so fresh, almost cleansing. It felt great to get some exercise. Well, here are some pictures from our day.