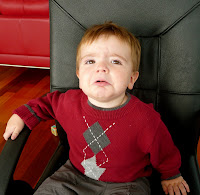 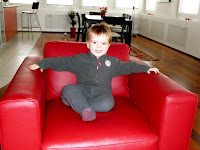 Today after dropping Coretta off at her friends house for her day trip in Germany, we went into Zug to do a little shopping for Geno since many of his clothes are too small, especially his shoes. We jumped on the bus in Hunenberg, and Geno was all smiles enjoying his lollipop.

We then walked through the Nevadst Passage with Geno again insisting on his incessant screeching while onlookers look at me as if to say "Can that women get control of her child?" or even better look as if to say "What is wrong with him?"

We then get some curry Thai (which unbelievably is one of Geno's favorites) and find a seat outside. Geno then pours Coke all the way down the front of his shirt because he insists on holding the bottle himself.

Then I had some woman approach me speaking in German working at a booth that was decorated with several balloons. I very graciously explain that I cannot speak German, so she conveniently speaks to me in English (I find that a lot here). I envy their ability here to weave in and out of three languages with ease. She then reads to me several philosophical quotes, gives Geno a balloon and hands me one to let go into the sky to touch another person. I believe my quotation was "Humor is like the wind, it always comes back at you." Hey Tom, being the philosopher you are, what does this mean?

After this, another well meaning German woman comes up and offers my son a blue balloon dog she created and he naturally tries to eat it. Another family looks in horror as he pops it with his teeth. As the saying goes, it is clear that my son is Ford tough.

We then decide that we should get home, Nick and I both trying to recover from illness, and Geno getting that look in his eye like a volcano ready to erupt in full throttle tantrum at any minute. He did not disappoint. I prayed that the train would go faster and faster. It was seriously the longest ten minutes ever.

Next, we get on to the bus to Hunenberg and at this point Geno is arching his back, crying at the top of his lungs, pulling my hair out in clumps and Nick standing 100 yards away so that onlookers will not associate US with him. I think he forgot that he is pushing a stroller with no kid in it. Guilty to any passersby that he IS with us.

I then motion to Nick that I am getting off the bus and walking home. Baffled by Nick's defiance, he doesn't follow until he sees Geno sitting on the floor, crying, and refusing to get up. I later found out that the only reason he did get off was because he didn't have the house key. How loving. We then walk home from Cham and vow that we are not ready for this kind of trip quite yet.
Posted by Unknown at 1:32 PM