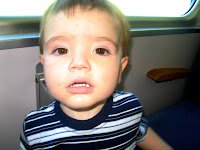 Today Geno and Coretta were playing on the patio while Nick and I were enjoying our morning coffee.  We could hear the typical banter between the two, and thought nothing of it.  Thought nothing of it, until we heard Coretta say "Geno, No!! " And the next thing we knew, we saw Geno fall from the top of the stairs to the patio, all the way down to the bottom.  It was like I was watching this in slow motion.  He would roll like a summersault, he just kept rolling, and rolling, and rolling, until he hit the floor.  I immediately ran over to him, scooped him up to access the damage.  Other than a slight bruise on his forehead, he appeared to be just fine.  Meanwhile Coretta is frantically blaming herself and crying.  I remember having a flashback to my little sister Erin's fall down the stairs at Grandma Lucca's house and her head swelling up to the size of a watermelon.  In my case, however, Geno appears to be fine.  Afterwards, he cried for about two seconds, and then asked for his milk.  He then started waving bye bye, playing on his choo choo train, and kissing everything in his sight.  My son is tough as nails, or as Grandpa Tom calls him, The Wrecking Ball.  I find this new nickname very appropriate.
Posted by Unknown at 3:20 AM