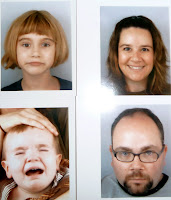 The second day that we are in Switzerland, Nick decides that we should go into Zug in the morning so that we can get the downloads he needs to hook up his work computer so we can be wired to the outside world. He is definitely in need of technology, including American television. We thought that once we arrived and the computer was set up, we could watch the shows we taped via slingbox, but that is still a work in progess. For some reason, we cannot get the slingbox to work.

Once in Zug, the kids and I ate authentic Italian pizza and went shopping while Nick got what he needed from work. We decided to meet back around 1:15 pm and then we would get our pictures taken in the photo booth, since we needed these for our rail passes as well as our immigration records. In this photo booth, you need to position your head just perfectly in this oval circle. Nick really struggled with this (he blames it on his big head) but his picture made him look like some creepy pedophile. Coretta was next to take her photo. She positioned her head within the oval circle just fine. Her problem was that she didn't know when it would take the picture so she has a sad frown on her face. Being almost nine, she was mortified by this and the fact that people would be seeing it. I jokingly pointed at Nick's picture and said,"Don't worry about that honey, look at your Dad's!!" which she then proceeded to laugh. Next, I went in for my photo, and it went fine. No weird facial expressions at all, but Geno would truly be the biggest challenge yet. We put Geno on my lap to take his photo and imagine trying to position a toddler's face in an oval circle on a screen. It is nearly impossible. I end up holding his head back, accidentally pulling his hair, and the result was a picture of him wincing in pain and crying. We all had a real good laugh at this, but didn't realize how bad our pictures were until the train station attendant laughed out loud at them as well. I hope that we will not be deported!!
Posted by Unknown at 10:25 AM