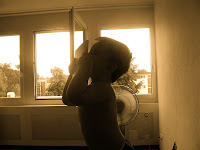 I know that it may be too early for Geno to have his first girlfriend, but he has this thing for girls on book covers, more specifically, Lizzie McGuire and Fern from Charlotte's Web. He was sitting on my bed playing, and he began to look into their eyes and kissed them on the lips. He would take one and then the other as to make sure that the other one would not be jealous. Coretta and I were laughing hysterically as he would do it again, and again, and again.

He may be a little bit conceited as well because when he saw himself in the mirror today, he smiled and kissed himself!!
Posted by Unknown at 7:53 AM