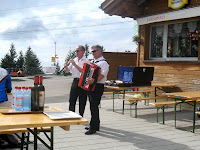 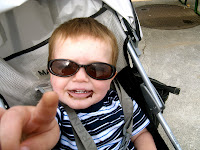 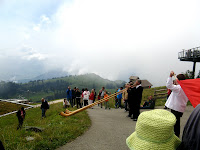 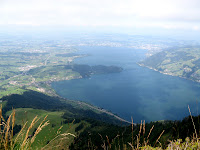 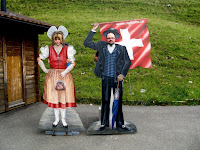 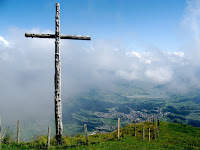 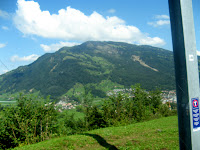 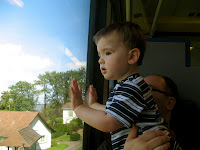 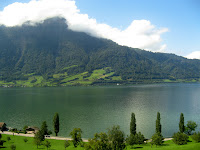 We decided to take a day trip to Mount Rigi yesterday and it was quite the adventure. In order to get there, we took a bus to Cham, a train to Zug, train to Arth, and then a train up to Mount Rigi. While at the train station in Zug, Nick was standing in line to get our tickets, and his camel pack leaked all over the floor and left a big puddle. I guess Geno bit off the end. Nick ran to the restroom (WC) to dump it out. Quite embarrassing for him, but funny to us!!

The sights from the train were fantastic. Great views of the trees, the lake, and the animals. We saw goats, sheep, and cows. Coretta found this to be quite amazing. Once up to the mountain we climbed up and Nick and Coretta climbed up the observation tower for a better look. We then descended the mountain and saw more views of the city.

We took time to take pictures as tourists to a new country, posing our head in the cut outs. We also saw these men playing these authentic swiss horns. It was a beautiful sound. Coretta bought five postcards and decided that she would start collecting postcards from all of our adventures, writing information on the back, and then putting them into her scrapbook.

We then stopped at the train station to see how we would get back. The woman told us that we would need to walk thirty minutes down the mountain. We then started off and saw much of the mountainous countryside. We also saw a jazz band playing 20's music.

Once to the bottom, we asked for directions again and found out we now needed to climb the same mountain path to get to the town of Staffel to take the train down. We have never climbed anything so steep. No wonder everyone up here at walking sticks!! Pushing Geno's stroller proved to be even harder. I believe that was the best exercise we had yet.

While waiting for the train, Coretta played in the playground and Nick and I had some German beer. While drinking our beer, two musicians came by playing the accordian and the clarinet. Coretta was pretty impressed with the musicians and seems to now have a fascination with the accordian.

Once there, we took the train down. When the woman came to check our tickets, she had to open the door outside and jump to the next train. Coretta couldn't believe that she did that. We also had musicians on this train that played for us as well. There was another accordian musician and a group of yodelers. I never though yodeling was all that pretty before. It wasn't yodelaheehoo type stuff, but resembled an opera sound. Very pretty.