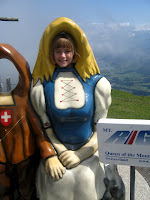 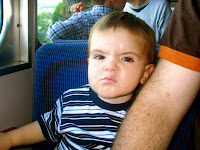 Geno has been adjusting fairly well here. He has reached a few milestones recently such as walking backwards, running, stacking blocks, putting his blocks away, as well as some of my favorites scratching, clawing, and now biting.

He does however give out hugs and kisses much more frequently and loves to be the center of attention.

Coretta is adjusting well and loves going on bike rides, walking to the park by herself, going to the store by herself, and even has her very own key to the apartment. Her new sense of independence is radiating from her.

She has also met some Swiss friends down the street that she likes to play with. They are studying English in school, which makes communicating with one another easier. When in doubt, they would try to act out the word they were trying to say. Coretta finds it to be a fun challenge, but when she got home, she was practicing her German.

Although she is nervous for school, we try to assure her that she will make friends and will be involved in many activities. I guess she'll just need to see it for herself.

She did say to me yesterday: "Mom, what is the best thing that has ever happened to you?" I immediately said without hesitation the birth of my children. She then said, "What would be the next?" Which I replied marrying her father. She then asked, "What then would be next?" I said definitely moving to Switzerland. When I asked her what was the best thing that ever happened to her, she said moving to Switzerland, but Disneyland is still second!!
Posted by Unknown at 11:06 AM