Night Out in Zurich Last night Nick and I went into Zurich for dinner. We met up with three other couples from Nick's work with each living in Switzerland for different periods, and different backgrounds. One couple was originally from Ireland and South Africa, another couple from Oklahoma who before this resided in New York, and another couple from India and France.

We first decided to walk into the old part of Zurich which Nick and I had never been. There were so many great shops, bars, and restaurants in this area. We decided to stop for some pre-dinner drinks at this quaint little bar. Since we didn't have reservations, we could not find a place that would take in a party of eight until 8:15 pm. In fact, they stated that it is a well known custom to not take people in without a reservation, so we were lucky to get in anywhere at all.

Rajesh convinced them to make an exception since we were "tourists." I have to say that this place had the best Thai cuisine I have had to date. We shared two bottles of Spanish wine from the Rioja region and decided to try the special of the day which started with an appetizer of spring rolls, asian m 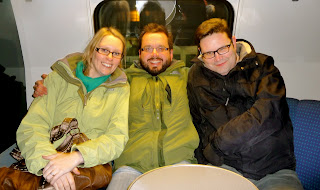 eatballs, jumbo shrimp wrapped like eggrolls, and a coconut curry soup. We then were served roasted duck, fish curry, spicy beef, vegetarian stir fry, and a chicken curry in the "homestyle" fashion. Once we finished these courses, they gave us dessert. Dessert consisted of mango, pineapple, and papaya topped with ice cream.

We then jumped on a train back to Hunenberg. I would say this was my most enjoyable date yet. Good food, good wine, and good conversation. What more can one ask for right?
Posted by Unknown at 2:23 AM