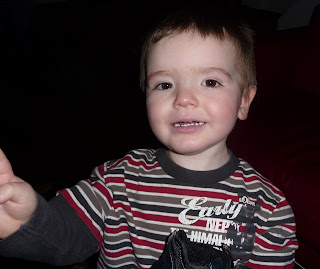 Today dropping Geno off at preschool proved much more difficult. As I strapped him in the car and drove off, he was all smiles, and in a great mood. Once we parked the car and I took him out of his car seat, his mood changed to that of uncertainty and apprehension. As we got up to the door, Geno planted his legs and would not budge. I literally needed to peel his feet from the pavement to get him in the door.

Once in, things got progressively worse with him holding on to my legs and crying. I picked him up, and he gave me the tightest hug possible as if to say "Please don't leave me." There was no way to assuage his fear, so I walked him into the classroom, rubbed his back, and hoped that his demeanor would change. When his teacher tried to give him a butterfly with his name on it, he wouldn't take it. He wouldn't even take it when I handed him the butterfly.

After a few minutes, I stated that I was going to leave, and he would probably chase after me. I saw him just standing there. All alone just standing there. Not crying, just standing looking lost. Everything in me wanted to scoop him up and bring him home. Nick keeps telling me to be strong, but that is proving to be more difficult every day. I hope that this will be a good thing. I have guilt for putting him into preschool, when I am home, but I was concerned about him socializing with children his age. I hope that pick up goes much better than earlier today, but I am feeling like a horrible Mom leaving him there right now. Wish me luck!

Update: When I picked Geno up from the Beehive Preschool, I saw a bunch of students in a circle introducing each other while they sang a song about feelings. Geno, however, was not in that circle. I caught a glimpse of him helping the teachers prepare the lunch (or picking up the spoons and forks and drinking out of all of the cups) with another little girl his age. I found out that this was her third day as well and had a tough day today as well. When Geno finally saw me, he ran to me and wanted to show me the alligator seesaw, but then quickly grabbed my hand and walked me to the front where the coats were as if to say "It is time to go now." With every day, may this transition be easier fro Mom and child. Amen.
Posted by Unknown at 12:04 AM