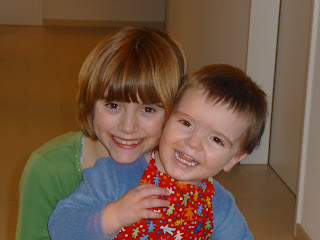 The more I took time to really listen and observe, I noticed that Geno really does have some vocabulary. For instance, he says Mow when he wants milk. He can say No and usually follows that up with a muffled "No, I don't want to." I noticed today, that he would answer, "Yeah" to me as well. The best thing that happened today is while we were reading his favorite book, I pointed to the color blue and said to Geno, "Say blue" which he answered with "blue!" To any other parent, saying the word blue would not be a big deal, but in my case it felt like I had won the lottery. Today I noticed that he actually said six words and one phrase.

What I find the most frustrating is when he tries to communicate with me, and I cannot decipher the words. What I did notice is that when I say, "I'm sorry, I don't understand you," Geno then repeats the same phrase with the same intonation but louder and with more intensity. If I then repeat to him that I still don't understand, he shakes his head and kind of growls.

Tonight when I stated it was time for bed, which is the one thing he never wants to do, he looked at me and said "Naw, I don't want to."

I haven't heard from the audiologist yet, which is frustrating since she said that this appointment could be done quickly. If I don't hear from her by Monday I'll have to call the office. Anyways, I thought today was very productive. Thanks to all for the words of encouragement and prayers. They mean a lot.
Posted by Unknown at 9:53 AM

wow .. u really are an author, I feel blessed to have come across it !!