Fasnacht or Carnival in Switzerland 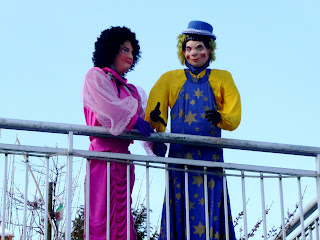 While walking through my village in Hunenberg this weekend, Coretta and I were shocked to see mannequins in elaborate costumes placed on terraces. According to Switzerland.com, "The Fasnacht (carnival) in Basel is recognized as the largest popular festival in Switzerland, with some 15,000 to 20,000 masked participants taking part.

The prelude is the Morgestraich on the Monday following Ash Wednesday. As the clock strikes four in the morning, groups of fifers and drummers in charivari costumes and masks with small headlights start moving through the dark center of down while playing their carnival tunes.


The Cliquen, or carnival cliques, carry transparent lanterns made from wood and canvas, most of them over three meters (9 ft) high. The light from within illuminates the carved out silhouette of an event which has marked the past year. The marches played are popular tunes from previous decades, with new ones added from time to time. 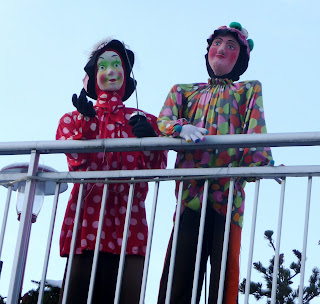 On Monday afternoon, and on Wednesday afternoon as well, the Cliquen march along a planned route through the city, making their way through throngs of spectators. Months before Fasnacht, a current theme is chosen and transposed to the costumes, masks, and lanterns. It also appears on the leaflets written in prose and verse in Basel dialect, which are distributed to the crowd. On both evenings, individuals and other small groups wander from bar to bar, singing and acting out events of the past year, all spiced with witty remarks the so called Schnitzelbängg, or caricatures. Tuesday evening is dedicated to the Guggemuusige, or masked musicians, who fill the streets of the city with their improvised cacophony.

To many, the best part of it all is the Gässle, or wandering through the narrow alleyways. Masked individuals and groups roam through the streets of the old city, playing pipes and drums, with spectators marching in time behind them. Festivities go on until four o'clock in the morning on Thursday. Then another year must pass until the clock strikes four again on the next Ash Wednesday, ringing in the next, much awaited carnival in Basel."

During this time, people indulge in good food and drink, knowing that Lent and fasting is right around the corner. For more information on the history, click on this link: Fasnachts-Comite. Here are some photos I took in the neighborhood.
Posted by Unknown at 2:55 AM