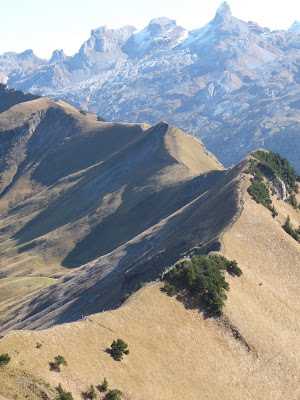 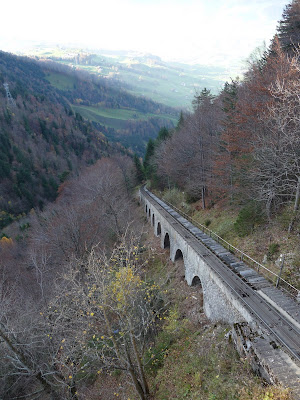 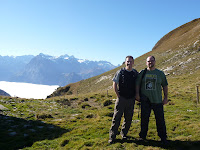 On Sunday, I (Nick) went on my first real mountain hike. I headed out with my friend Bob (a co-worker from Rosemount) and Chuck (a co-worker from New York) t0 the mountain town of Stoos. After a few failed attempts to drive steep mountain passes to the top of a peak we had mapped out (including a "shocking" lesson in how electric gates keep cattle and Americans at pasture), we decided to park and take the furnicular train. 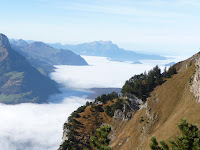 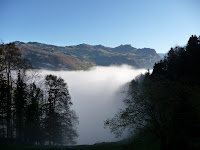 After a steep climb up the mountain, we finally broke above the clouds and got off. We then hiked a half mile to get on a set of two chairlifts that brought us even further up the mountain. Once there, we began our hike.

Our hike took us along the ridgeline of 5 mountain peaks, with steep climbs and descents along the way. This was tough work, and I'm glad that Chuck, the former army guy and marathon runner brought a book to read while he waited for me to catch up. 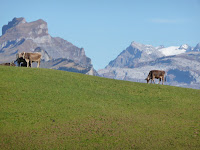 The views were amazing, looking down on beds of clouds, little villages and herds of cattle (their bells ringing through the mountains as they grazed).

After three and a half hours of vigorous exercise under the sun, we finally completed our hike, taking a chairlift to a village for a big meal and several beers under the sun. 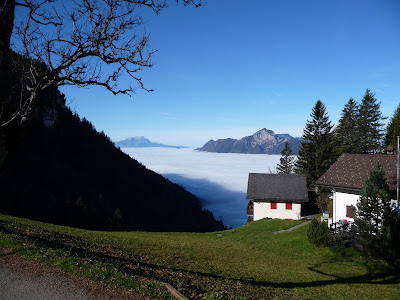 Breathe taking pictures! Are you sure you didn't get them out of a magazine???