The Pre-history Museum in Zug 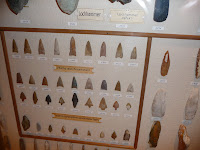 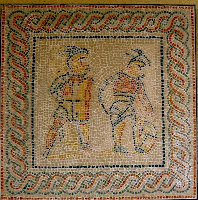 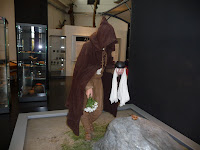 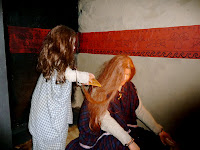 Coretta, Geno and I ventured to Zug today to check out the Pre-history Museum. The woman at the counter did the best to speak to us in what English she knew and found a 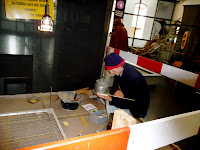 pamphlet that translated the information within the museum into English.

First, we learned about the Early and Middle Stone Age. We learned that during this period people were constantly hungry and spent most of their time hunting and gathering for survival. Many of the tools they used were made out of bone, wood, and stones.

Next, we learned about the Late Stone Age. This seemed to be the era of farmers and cattle breeders. We learned that they didn't just use traps to catch prey, but used a bow and arrow and women had to grind flour into bread which was a painstakingly hard and long process. One particular person named Marwa lived in the village at the Lake of Zug. It consisted of roughly 120 houses and was only as big as the old part of Zug today. We also learned that one year the whole village burned down and many times the area has been flooded as well.

The next period we learned about was the Iron Age--the Genwaira Period. We know this was a time of many wars. They hardly have any settlement remains from this period. The burial of a richly decorated lady is displayed in the museum. The burials show a huge difference between the rich and the poor.

The next period was the Roman Period. They brought order, luxury and new religions. They loved baths and the theatre. However, in this region there were few Romans unless they were soldiers or officials from the South.

Overall, it was a great museum exhibition where we saw many things and learned some history too!
Posted by Unknown at 5:54 AM

That is SOOOOO interesting! I love that kind of stuff...you'll have to take me to these places when Mom and I come to see you!

Im pleased that you are taking my grand-kids to museums.