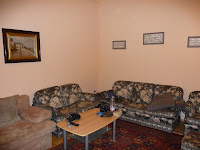 In exchange for three days of leave from the bliss of domesticated life, Crystal required me to write this post about my trip to Munich.

Me, a friend from work and some guests from Minnesota headed out on Thursday. We decided a train would be best, since parking might get expensive, and more importantly, we wanted to start drinking beer without any hassles. The dining car was a fantastic spot for just this purpose - I tried a few tasty amber biers, enjoyed some meat and cheese plates, and arrived at a culinary cul de sac as I topped it all off with pretzels and gummy bears.

We arrived in Munich about 5 hours later, and headed to the apartment. Bob had rented a 3 bedroom apartment over the internet, sending someone 300 euros as a deposit, in exchange for some pictures and a promise to meet us. As we waited for 30 minutes outside this building in the Muslim section of Munich, we started to wonder whether Bob had been duped. (Desperate for reassurance, we sought the opinion of a nice man at the nearby antique watch store - in his words, "Perhaps this was a scam...") Bob had no phone number to call, and we were starting to get nervous. I was tempted to grab a quick beer and Kebab, and head back to the train station.

Finally, the rental agent arrived with his 5 year old son, who was very excited to see these half-drunk oversized Americans (one of us was 6 foot 7, and I'm of course, well-rounded, especially by European standards.) The little boy made a point of showing off his shadow-boxing skills, punching my hands until he finally ran out of steam.

That night, we headed to the festivities. We were less than a mile away. Oktoberfest feels like a really big county fair, but with much better food -- until you go into one of the beer houses. And getting in is a challenge. While some places allow you to reserve tables, many do not. Instead, people show up well before noon to stake their claim to a table. Those who don't wait outside, hoping security will open the doors to let a few people in, and pushing their way to the front. We finally manged to get in the Spaten "tent." Once in, we saw thousands of people of different 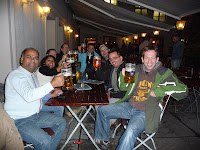 ages, most dressed in traditional German outfits, drink and eat and sing and dance (often on the tables) all day long. Some were asleep at the table, others were being carried out. To get a beer we needed to be at a table, so we sort of squeezed ourselves in. The music in this tent had a very wide range, from traditional songs about Bavaria (which I later learned had really dirty lyrics) to a big band version of your favorite and mine, Billy Ray Cyrus's "Achy Breaky Heart!"

After exploring the festival grounds a little, we then ended up at an outdoor biergarten. But since it was 10 o'clock, they had stopped serving beer and were only serving 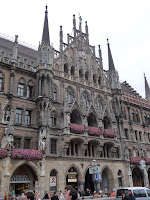 wine and champagne. I, for one, was not discouraged, and before you knew it we were drinking mugs of red wine and making all kinds of friends. (I'm fascinated by talking to young German people -- they seem to have a few things in common with regard to their perception of American culture...for example, many really like America's "cowboy culture" (big boots, pick-up trucks, lots of open land) as they have learned about it through Kid Rock videos and probably "Walker: Texas Ranger" re-runs), hip hop (Snoop Dog has a healthy following), and the ability to make lots of money. Everyone had an interest in the outcome of the upcoming US election, expressing hope our next President would be Barack Obama.

The next morning was tough, to say the least. But despite a slow start, we regained our footing and starting to have some good luck -- finding a TABLE (and 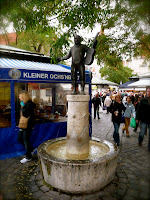 new friends) at the Hoffbrau tent, meeting 20 co-workers and friends at a Tex-Mex restaurant, and finally visiting the Hoffbrau Haus, an 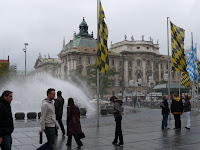 amazing building with a terrace and garden seating in the city (and really good dunkel (dark) beer.)

On my final (half) day, I walked into the town center to see historical buildings, browse through an open market, have some espresso and breakfast, and take some pictures. While others were heading down to get a space at the tents for the day (and night?), I jumped back on the train, with some great memories yet very excited to see my family.
Posted by Unknown at 5:55 AM