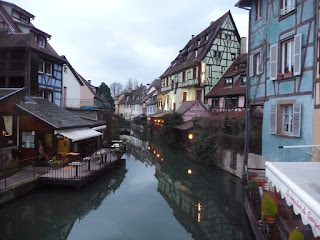 On March 5th, my Mom, Dad, Coretta and I ventured out to see Colmar France. It is roughly two hours away and thought it would be a good place to visit. We left around one o'clock and arrived in Colmar around 3:30 pm. Overall, the drive went smoothly. I drove slow enough I think to not end up with any dreaded tickets, but too slow for one passerby in particular. In fact, he came up along side me and gave me the worst evil eye I have ever seen and kept doing this for a couple minutes. I may have been intimidated if he wasn't wearing horned rimmed glasses and looked like Buddy Holly. We got a good laugh out of that.

Once into Colmar, we found our hotel after a couple of wrong turns and proceeded to park in the underground car park. Like always, the parking garage was very small and hard to navigate. If the company hadn't given us our car, I would have opted for a small electric car that can fit in the tiniest of spaces. We then grabbed our belongings, locked the car and checked in. Most hotels in Europe have much smaller rooms than that in the United States, but much better linens. It was cozy and comfortable and in the heart of the city which I like.

Once we unpacked our things, we decided to venture out and get familiar with our surroundings. We saw many of the German style chalets and many french style sculptures and fountains. Like Strasbourg, Colmar does a great job of combining both the German and French influences since it has been claimed by both countries in the past. That night, we decided to eat at a small, but quaint cafe that served Alsacian style food. Coretta had lasagna, my Dad had a steak, and my Mom and I had the traditional German meal which consists of Rosti potatoes, ham, sausage, and cheese served like a c 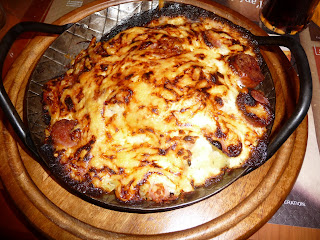 asserole. The food was great.

The next day, we decided to venture out early and have a tour of the Unterlinden Museum which used to be the convent of the Dominican order. This was definitely one of the highlights of Colmar. They had original paintings by Picasso and several religious altar pieces, oil paintings, and tombs to learn about and discover. They also had several old slide projectors with the actual wooden slides that were projected on the wall. It also had a hand help device that explained all of the sculptures and art in English which really helped.

We then enjoyed shopping in 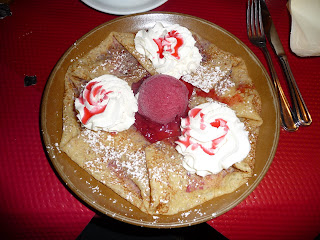 the many beautiful boutiques, shops, bakeries, and candy stores that Colmar has to offer. For lunch, we ate at the crepeteria which I read online had some of the best crepes. We sat down in what appeared to be the basement of a chalet that was beautifully decorated in a medieval theme. The crepes were outstanding. Coretta and I had the raspberry crepe where my Mom and Dad had the ham, cheese, onion, and mushroom crepe.

On our last day in Colmar, we did even more shopping and sightseeing taking a trolley tour that explained in English many of the landmarks of the city including the Petite Venice area. This area is as if you have stepped into Venice Italy with it's homes a 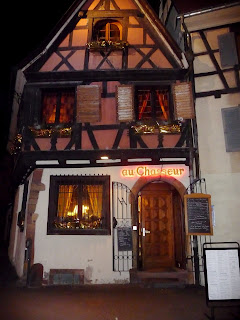 long the river, gondola rides, art work and scenery. A must see if you are ever in Colmar.

The last night we ate at Chasseur Restaurant near the Petite Venise area. It was a very quaint little chalet with good food and wine. Since the region is known for it's Resling vintage, we had a couple glasses of it with our food. My Dad had veal, my Mom had chicken, and I had scallops and shrimp. All went well until my Mom realized the next day that she left the remainder of her euros on the table (100 to be exact) and her response was "I guess I tip France!"

Once we checked out of the hotel, we were on our way to the Koenigsbourg Castle. As we drove towards the castle, we came across the statue of liberty in the middle of the round about. Because we were driving, we couldn't get a picture of the front of it. The french sculptor who created the statue of liberty for the United States was born in Colmar and when he died, they pu 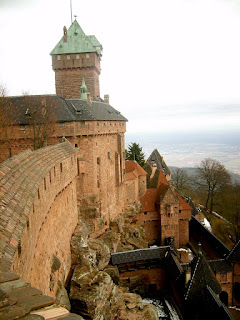 t up a replica statue in his honor.

All in all, this was a great trip we will always remember with my Mom and Dad.

Here are more pictures of Colmar France: Our trip to Colmar
and more pictures from the Koeningsbourg Castle if Interested: The Castle
Posted by Unknown at 10:17 AM