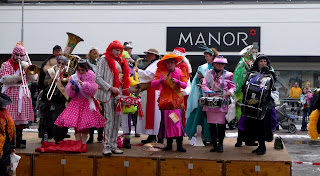 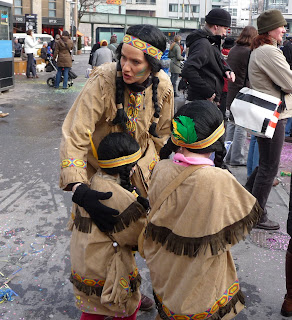 Coretta, Geno, and I traveled in to Zug today for the Faschnaut kid parade. It 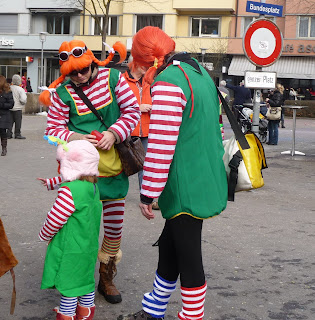 is amazing how many people both young and old that dress up. In fact, if you are not dressed up you felt out of place.

There was literally hundreds of people lining up around the old part of Zug through the Metalli area waiting for the parade to start. I can't believe the turn out during a working day!

When the parade did start, there were many marching bands playing dressed in Mardi Gras attire and many parades of children dressed up as tigers, flowers, Pipi Longstocking, pirates, Indians, cowboys, sheep, you name it.

Luckily Geno was not afraid of all the costumes. Being the thinker he is, he just stood back, observed, and took it all in. Coretta being a lover of festivals thought it was the neatest thing. Even the bus drivers are dressed up. These festivities will now take place until March 1st.

In fact, festivities began as early as four in the morning in Luzern with bands, costumes, and drinking. Afterwards, we ate lunch at New York Pizza and went home. 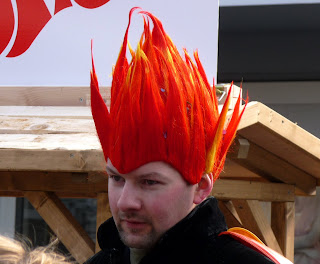 Here is a short nine second video of one of the bands playing.