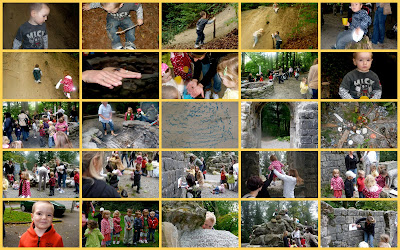 Geno had his first school field trip yesterday and it was definitely a success. We all arrived at the school, and then headed out by car to the Hunenberg Ruins. The actual name of our village Hünenberg goes back to the old German short name of Huno (Huno's mountain), which must first have been used at this early medieval time. According to the history of the Canton site, they state the following historical information about the Hunenberg Knights:

1173
"This was the year the noble line of the Knights of Hünenberg was mentioned for the first time. This noble lineage is the most important ministerial nobility in the Canton of Zug. Their family castle stands at the south-western exit to the village. The Lords of Hünenberg managed to increase their possessions and their prestige during the 13th century.


1315
The secure position of the Knights of Hünenberg was threatened at the beginning of the 14th century, when the peasants of Uri, Schwyz and Unterwalden came into conflict with the Habsburg Duke. The Battle of Morgarten took place on 15 November 1315. According to the saga, Heinrich von Hünenberg shot an arrow over the battlements at Arth with a message to warn the Schwyzers and which read, "Beware Morgarten on St. Othmar's eve". The Knights of Hünenberg drew the consequences from the political situation that further deteriorated in 1352 after Zug joined the Confederation. They transfer /their residence and moved to the town.


1388
On 24 December of all days, troops supporting the Habsburgs crossed the Reuss, stole, plundered and burnt in the area between Hünenberg and the present-day St. Wolfgang. The Zugers, under their Mayor, Hans von Hospental, wanted to reclaim the spoils of war. The skirmish took place at the graveyard where 42 Zugers were slain, including their leader."

Once to the Hunenberg ruins, the children were able to play a little bit. First off, they were hoisted through the alcove door by the teachers and met around the corner by their parents. It is here, that the younger students were given a piece of paper where they could then transpose a piece of the castle wall onto their paper in any color they wanted. The older students were allowed to sketch what the Hunenberg Ruins looked like.

Along our nature exploration hike, every student was given a plastic bag to collect things that were signs of autumn (sticks, leaves, acorns, pine cones). The adults were given a sheet with a list of guided questions to ask the students such as:
Once the hike was done, we then met down by the river and waterfalls where we had a camp fire and then had our snack. Geno kept trying to hang out with the older boys trying to emulate anything and everything they were trying to do, including sliding down a steep ravine. I deterred him from that task and instead showed him how to climb up it. The older boys did so with ease, but Geno only made it half way up.

He also enjoyed throwing rocks into the river and running around with the other students. It is clear that the teachers put a lot of thought and time into planning this field trip and was very impressed with their efforts as well. Looking forward to chaperoning the next outing!

Below is a video from the day. Enjoy!