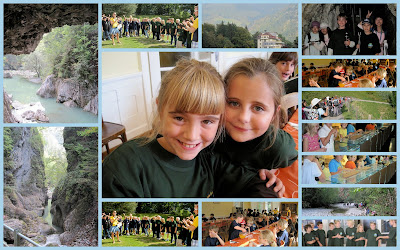 Coretta returned from field week yesterday, and I missed her so much. With that said, it is clear that she had a fabulous time. The actual drive was about four hours and they rode on a double decker bus which had a television on it so they could watch movies. Once to their hotel, they checked in, and Coretta bunked with her classmate Eva. At the hotel every night, the students could choose activities to do such as: SingStar on the Wii, ping pong, pool, air hockey, and a variety of video games in the game room.

One main activity that they did, is that they were broken into groups for a team building experience. It was called the Mini Olympics. Each group received a t-shirt with the color of their team and competed in jump roping, running, and an egg/spoon race. They then would earn points for their house team. There were 1st through 5th place for the competitions with only first place receiving a huge Toblerone chocolate bar. Coretta's house team placed second.

Another activity was hiking in the forest where they saw spectacular views of mountains, glaciers, and gorges. Coretta even took a night walk in the village which got her a little teary eyed as she passed homes with their lights on and families inside thinking of her own. Bless her heart. It is here where they were able to buy souvenirs for their families and themselves. Coretta bought a cow key chain for Geno which he absolutely loved, some postcards and pen for herself, cheese for her Dad, and chocolate for her Mom. Very thoughtful little girl.

Coretta was able to play soccer with several classmates which has become one of her favorite past times.

They then went to tour the Cailler Chocolate Factory where they learned first hand how the chocolate was made and packaged, and the best part, sample different kinds of chocolate.
They also had the opportunity to tour the Gruyere Cheese Factory in the mountains. It is here where they learned how the cheese as made and packaged, as well as sample the final product.

The last night, the 4th grade groups, which I believe to be about 4 different classes at the school, were able to have a disco (what they call a dance in America). Coretta said that they had the dance in an old church which was decorated with lights and they played several songs such as the classic YMCA. In Coretta's words, "The disco rocked!!"

She came home a tired and weary traveler with many experiences and memories that will last a lifetime.