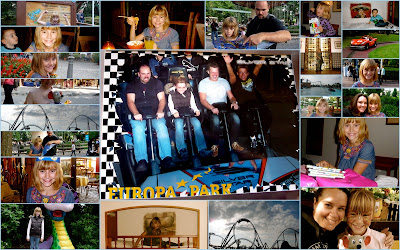 This past weekend, we took the family to Rust, Germany to spend some quality time together and celebrate Coretta's 10th birthday in Europa Park. Europa Park is an amusement park similar to Disneyland in America. We woke up and were on the road around 9 am on Saturday and rolled into the park around noon. Everything was going well until Geno decided he needed to puke in the car. All of a sudden he just started upchucking, Coretta is freaking out and gagging on the smell, and Nick is trying to find a place to pull over. Once I cleaned him up and put on a clean set of clothes on him, we were on the road once again. We then went to see if we could check in to the hotel, but they stated that we could check in at 3 and gave us our park tickets. The Hotel Andaluz was a Spanish inspired hotel in the Spanish part of the park. The hotel was beautiful and the kids had these bunk beds that were built into the wall. We parked the car, and decided to spend the afternoon on rides. Coretta and Dad being the roller coaster enthusiasts, went out with the map seeking the biggest thrill. The first roller coaster they went on was called the Blue Fire. I especially liked this one as well. This specific mega coaster shoots you out from the start with such massive force that it startles you. It has a heart beat register on the hand bar, so you can check your pulse rate. Coretta said Dad's was all over the place on the ride. It turns you upside down, twists you, and many dips and turns. Well worth the ride.

The next roller coaster they went on was the Silver Star. This is fairly new coaster and was rated the best one at the park. Coretta and Dad would have to agree. This coaster has you going at 100 mph and is not for the weak kneed or faint of heart. They even got the picture as a souvenir. The picture above speaks for itself. 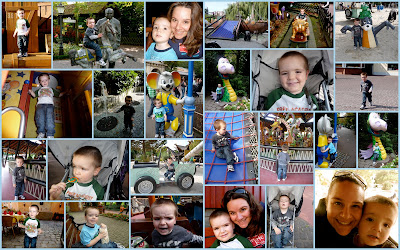 Geno is not a big fan of rides, or at least not in the beginning. The first ride we put him on was a little airplane ride that spun around. Geno cried the whole time yelling "I'm done now!! Mommy, I scared!!" Once the ride stopped, however, he yelled very loudly, "I DID IT!!" with a very satisfied and proud look on his face. We then went to have lunch.

We chose to eat at an Asian restaurant and the food was good. Inside the restaurant you could watch people traveling in a dimly lit boat ride with fake animals and people all around. Geno seemed to be fascinated with the monkeys and apparently seemed to be not scared, so after lunch we decided to try it out. When we got on the boat, we were fine, until it took a big dip. At this point Geno grabbed for me and the "I scared" began. I reassured them that there was nothing to be scared of, but the fake tiger reassured him that there was. Once we got off the boat, Geno yelled, I DID IT" again and then kept saying "boat, water, tiger, scary!"

We then parted ways, Coretta and Dad on their own and Geno and I on our own. While Coretta and Nick went to seek out the next thrill ride, Geno and I went into Kiddie Land and decided to go on the more tame rides. Geno and I while in Petite France, decided to try another boat ride that appeared to be tame and fairy friendly. Geno was much better on this ride and loved the frogs and their repetitive sound of Woa, Woa as we passed them. Afterwards, he kept saying "Frog say Woa Woa!" We then decided to take the choo choo train ride which he loved as well. 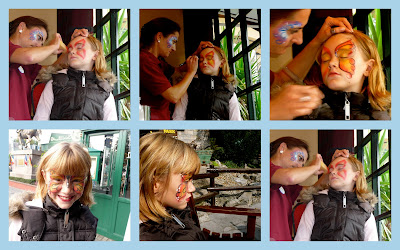 Next, Coretta decided to have her face painted or 6 Euros and she chose the schmettling or butterfly. It took under 10 minutes to create and I thought it was beautiful. The picture above shows the steps and the final result.

The first night, we made reservations for dinner at the Castillo in the hotel which was buffet style. The restaurant itself reminded me of a castle during the Victorian period. It was majestic and beautiful. After dinner, Coretta and I decided to go swimming in the outdoor pool and Nick and Geno stayed back. We all ended up going to bed at 9 am so we would be refreshed for the next day, until Geno woke us up at 4 in the morning. We couldn't get him to go back to sleep, so we changed his diaper and put on the cartoons. Nick, being tired, and not patient with Geno, ended up yelling at him. Geno's response in his exact own words? "Daddy, you're a mean old bear!" Coretta and I laughed so hard. Not only was it a sentence, but metaphoric as well.

The next day we continued to go on more and more rides and stayed at the park until 6 pm. I must say that this was well worth the time and money. Once in the park itself, things are reasonably priced unlike Disneyland. I would rate it a must see if you are in the area. We plan to go back regularly while we are living in Switzerland.