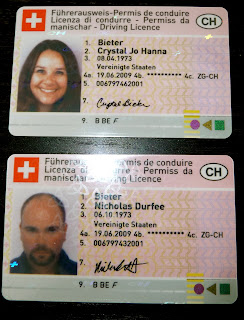 It has almost been a year since we moved to Switzerland. One of the requirements to drive in Switzerland, is to apply for a Swiss license within a year of your arrival. Nick and I took care of this recently and we had to have a recent photo of ourselves, our B permits, paperwork filled out, eye exams, and our American driver's licenses to process our request. We had been told that if we didn't get this done within a year, we would be forced to take the test in German (and I for sure would fail). In case you didn't know, Swiss drivers aren't allowed a license until their 21. (They can drink at 16, but they are not safe to drive until their older). I found this to be an interesting fact.

Everything was going smoothly until Nick was informed that his photo wouldn't work because a the top of his head was cut off. Pictures submitted needed so many centimeters of white space above your head apparently, so he had to take it over. We then were informed that we also needed our B permits in order to apply, so we had to run home to get this as well. Little chaotic, but we are legally allowed to drive in Switzerland now.

Here is a photo of our new Swiss driver's licenses.
Posted by Unknown at 11:33 PM