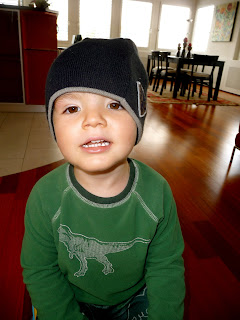 For the past month, Geno has been seeing a speech therapist who comes to our house and plays with him for an hour and a half every day. They play with toys, practice twisting the tops off of caps, cutting playdough, roleplaying, and several activites that look at cause and effect.

Yesterday we had our first official meeting to see what she has observed this past month and what our next steps are in regards to Geno's speech. The tests done were completed on April 30th 2009 when Geno was 28 months old. The tests stated that in gross motor skills, Geno was at 30.5 months, but when it came to his fine motor skills, he was at 18.5 months (10 months behind). His actual recognition of words (hearing and speaking) was also below average at around 18.5 months (10 months behind). His ability to do things independently without assistance was also below average at 17.5 months (12 months behind), and lastly when it came to his emotional growth he was at 27.5 months which was in the normal range. She also noted that although Geno has had some success in learning new words, he is not able to say any verbs at this point.

Since the test, two months have passed and Geno has really improved in all of his problem areas. Using his words more to communicate, being able to play independently, but he is about 7 months behind overall. Our speech therapist has recommended that she work with Geno once a week until he is 4 (if needed). I think that it is highly likely that by the time he reaches school age, that he will be right where he should be in regards to his peers.

Overall, it was a very productive and helpful meeting.
Posted by Unknown at 11:05 PM