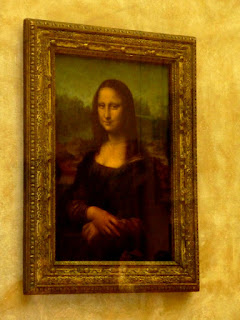 Coretta and I woke up early and decided to have a full day of sightseeing and museums. We first went to the Louvre Museum. This museum dates back to the 1200s and has been labeled the world's most important museum. Everything from Roman, Italian, Greek, and Egyptian antiquities and paintings can be found here. Coretta and I especially enjoyed all of the oil paintings including seeing the original Mona Lisa. They had artists such as Van Gogh, Monet, and DaVinci. Pretty amazing place if you love history and art. Below the Louvre you can see parts of what the Louvre used to loo 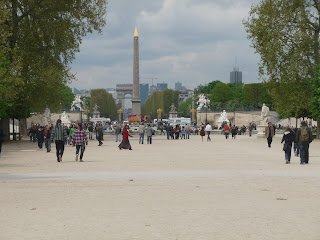 k like back in the earlier centuries. We also saw the Sphinx and the Venus of Milo. I was amazed that the Venus of Milo was actually discovered in 1820 by a peasant on the island of Milo in the Cyclades thus the name.

Once we finished at the Louvre some four hours later, we decided to spend some time in the Tuileries Garden outside. It was beautiful with many pathways and sculptures to look at throughput the park. We decided to have lunch here on the patio of a restaurant overlooking a man-made pond. Very beautiful. As we walked, we also saw the President's Palace as well as the Place de la Concorde. The Place de la Con 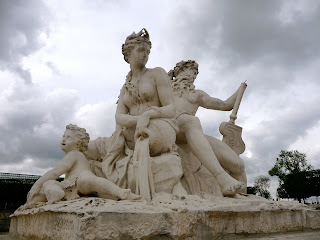 corde was constructed between 1757 and 1779. The square was originally dedicated to Louis XV. As we walked through the garden heading to the Eiffel Tower we came across several other historic monuments. One of the bridges in particular was stunning. It is called the Pont Alexandre III. This specific bridge has a metal span 107 meters 350 feet long and 40 meters. It was built between 1896 and 1900 and was created as an alliance between the Russian and the French. The allegoric figures, the gold etching, and the decorative motifs make it a must see in Paris.

Once to the Eiffel tower, Coretta and I were amazed with it's overall size. In fact, it proved difficult when close to get the entire tower in a picture. The Effiel tower was created in 1889 for the World Fair. It was designed and created by Gustav Eiffel, hence the name, who was an engineer. Coretta and I enjoyed sitting out on the park benches, watching all of the people, eating ice cream, 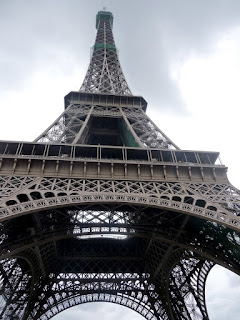 and trying to be sold cheap trinkets. In fact, the worst place to be constantly barraged with vendors is around the Eiffel Tower. I do not know how many times we were approached and bargained with. We found it quite humorous and needless to say their persuasion was lost on us.

As if we haven't already had a full day, we decided to head over to the Musee D'Orsay. This was definitely one of my favorite museums. They have sculpture, architecture, paintings, decorative arts, and cinematography. My favorite paintings were that of my favorie artist Gustav Klimt as well as the sculptures by Rodin.

That night we decided to eat some Italian and found a great restaurant that made great ravioli, lasagna, and stuffed pasta. Once fed, we decided to take a night stroll along the river and decided to take one of the many boat tours on the Seine River. We were to board our boat at 9:15 pm and 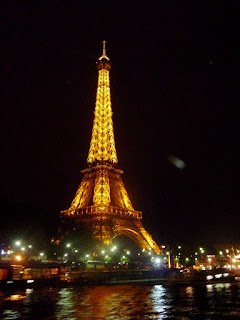 the tour would last an hour pointing out all of the historic monuments along the way. Coretta and I made sure to be the first in line so we could sit on the top. We sat next to a Russian couple and their grandson who have visited Paris many times and gave us much insight to each monument. The one monument in particular that was amazing to see at night was the Eiffel Tower. It was as if it was glowing.

Great full day in the City of Lights.
Posted by Unknown at 3:13 AM