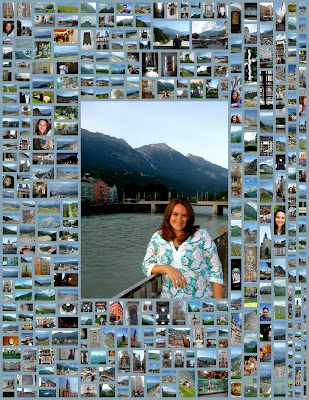 This weekend, Nick and I headed to Innsbruck, Austria for a romantic weekend without the kids. Our neighbors, the Burkert's, so graciously offered to watch our children and we agreed to watch their kids later that week when they went to Verona, Italy.

Friday morning, around 10 am, we dropped the kids off at Ronnie and Ron's place. We then talked a little bit about the schedules, and I snuck out so that Geno would not see me leave. Then, Nick and I jumped in the car for our three and a half hour car ride to Austria.

Once there, we checked into the Innsbruck Hotel located in the old town. The staff was very friendly, attentive, and helpful. They gave us our keys, scheduled our massages for us the next day, and also let us know that we were welcome to enjoy the spa on the terrace, but that this area was nude only. Nick and I, already knowing this through others who have traveled in Austria were not surprised.

We then went up to our room and were pleasantly surprised with the size of the room and the view over the old town. It was perfect. We then decided to do some sight seeing in the old town and get a feel for the city. We had lunch at the Pizzeria Romantica where we had pizza and pasta and sampled their region beer, the Zipfer, which was quite good. Once we were done taking pictures and sight seeing for the day, we went back to the hotel to get ready for our three course meal at The Pavillion. This proved somewhat difficult, because even though we asked for directions a handful of times, we couldn't seem to find it. Once we found it, we found a quaint little park where we sat and watched tourists paying for horse carriage rides.

Once we reached the restaurant, we were cordially greeted and seated to our table. The table had real linens and gorgeous views of the Theatre District right outside the old town. We were then told that the chef has prepared a special meal for us. I have never ate at a restaurant where they choose the menu as well. We were first served a beer, then some good bread with different pates. Next we received a champagne glass filled with chives, onions, cheese, and a quail egg. Next they served us quail meat and Asian wraps. The next course was rabbit (which I couldn't eat and gave to Nick) that was breaded with what seemed to be raspberry sauce. Next, we were served veal loin, mushrooms, and small little potatoes. Lastly we had some kind of fried coconut banana with cake and ice cream. Nick and I also ordered some wine from the rioja region which complimented the food very nicely. We then took a romantic stroll through the old town back to the hotel. 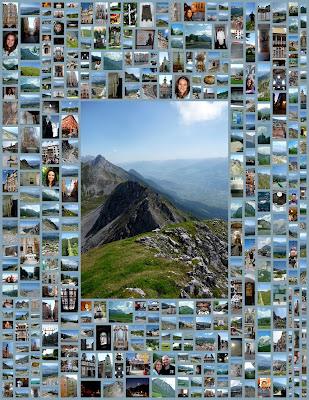 The next day, we woke up and had breakfast and then headed to the Hungerberg Northbahn to spend the afternoon amongst the mountains. Once on the cable car, it took us up 2300 meters above sea level. Once there, we got off, and looked around. The views were fantastic of the mountains and also of the city. Nick and I decided that we would walk along the ridge of the mountain and do some hiking. As we were hiking, we saw sheep grazing, even better views of mountains and the city. This was my first time walking along the ridge line and holding on to wires in certain areas to get by. Overall, I did very well. My fear of heights is getting better and I attribute that to living in Switzerland. Once we finished hiking, we went into Hungerberg which was two stops down the mountain and had a beverage, and then back into the city. We had our massages scheduled for 3 and 3:30, but when we arrived back to the hotel, we found out that our masseuse was sick and they rescheduled them for 5 and 5:30 pm with another masseuse. We decided to go back to our room and relax. Nick's massage was first, so he went up and decided that he would take a Finnish sauna in the NUDE only terrace before his massage.

Once done with our massages, we went back to the room and got ready for dinner at the Akropolis which has some of the best Greek food I have ever had. It was romantic and a perfect end to a perfect day.

The next day, we had breakfast, packed up, and were back in Switzerland by 4 pm feeling relaxed and rejuvenated.
Posted by Unknown at 10:18 AM