Back to School for Geno 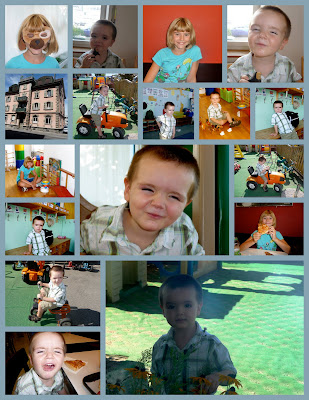 Today was the Beehive International Preschool Open House. Families and children met, talked, and familiarized themselves with the school. When we began to drive to the school, Geno started crying. He remembered the school and associated that with his Mommy leaving.

When we entered the school, he hid behind me, very shy as if talking would do him harm. We brought him over to the slide and he started to warm up. When his teacher Nadine came over and asked for a hug, he gave her a big smile and ran away. When she came back a second time for a high five, he said "No, kiss" and kissed her on the lips.

Next, he went outside and decided that he wanted to ride one of the numerous trikes on display. The first one he tried was too small, but the second one was just right. I think he has a great year ahead of him.

Since Coretta didn't have school, she, too joined us. We then went into Zug to do some shopping and have lunch at New York Pizza (Geno and Coretta's favorite place).

The next place we went was to Geno's first speech therapy session since summer vacation. We showed up at the school, to find out that his teacher wasn't there. We later found out that she was at our house while we were at the Zug office. I guess we had a little miscommunication on the location. Once there, she worked with Geno through role-play. First feeding the animals with clay, and then giving each of them water. they then moved to building homes for the animals, to sliding each animal down a ramp where Coretta would collect them and Geno would pull them up with a makeshift pulley system. She was equally impressed with his language development since our last session. Way to Go Geno!!
Posted by Unknown at 12:59 PM