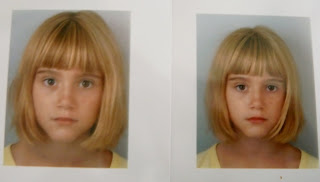 Today we all got ready and headed to the Immigration office to sign a couple of documents and hope that our re-take pictures were of satisfactory quality per Swiss standards. We arrived shortly after they opened and I noticed that hanging on the right side of the wall, was a diagram of pictures done correctly and incorrectly. Sure enough, smiling with your teeth was one of those criteria for unacceptable photo. What I didn't know, however, is that you need so many centimeters of white space above your head as well. I also learned that hats, burkas covering the face, and headbands are unacceptable as well.

Looking at our pictures while we waited in line, I noticed that both Coretta and my photos appeared to have no white space at all. I told this to Nick, who by the looks of him was one on edge and nervous to begin with, told me to be quiet. Once it was our turn, Coretta and I were both asked to sign our signature in a specific box with a specific type of pen and then were told that Coretta's photo did not fit the requirements.

Instead of mailing this photo in, I opted to go to the train station at the photo booth, and pour more Swiss francs into it in hopes for the photo that will pass. It was hard enough getting Geno's correct, and I am still paying for it since my leg still has a pulled muscle that keeps me up at night. Coretta took a set of pictures that we believed had enough white space, until they were printed. Now we needed to get change (because the machine only takes exact change) so that we could try this again. It finally did work, and I presented this again to the Immigration office, who finally accepted it. In all, I think we spent about 64 Swiss Francs. Each photo set costing 8 Swiss francs when done correctly.

Here are a couple photos of Coretta's new immigration photo. The one on the left was unacceptable and the one on the right was finally given the Swiss stamp of approval. At least I do not need to renew my B permit for another year.
Posted by Unknown at 5:14 AM