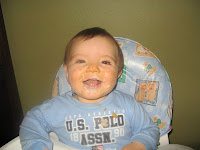 Geno turned ten months old today. His personality is coming out more and more each day. He seems to be a very happy child that does not need much to keep him occupied. If he has a cord, a string, a newspaper, a toy, he can play with it for hours. In his saucer he loves to spin himself around and around and around and giggles loudly at his accomplishment. Guess he loves getting dizzy. He enjoys the freedom of crawling and getting into mischief such as trying to eat the dog food and splashing in Charlie's water bowl.

His hair is definitely beginning to curl in the back which reminds me of Nick's baby pictures. He definitely has a laid back mentality (like his Dad), but he is also very outspoken (like his Mom). He smiles almost constantly and loves to terrorize Charlie. Charlie has really been a good sport.

He loves to be read to by his big sister Coretta and enjoys terrorizing her as well by trying to pull her necklaces off her neck. His favorite stuffed animal of the moment is the one that Grandma Marilyn gave him at Easter. He loves to hug him and kiss his face. He also loves to go to the park, play in the leaves, the sand, and loves to swing. The higher the better and he squeals with delight.

As for Mom and Dad, he loves to hit and slap us in the face, try to poke our eyes out, and when we wince or show pain, he laughs. Not quite sure what that means yet, but it probably isn't good. At least he is able to say Mama and Dada now which gives us both great pleasure.

He has also learned that he can wave bye bye now. It is very interesting to observe because he stares at his hand in amazement and will do it with both his right and left hand. Furthermore, spit bubbles and spit noises are still the "in" thing to do as well as spit his oatmeal out in your face. What a kid!!

He still has a good appetite and have yet to find a food he doesn't like. At least he loves his fruits and vegetables!!

Here is the latest picture of Geno as well as a video of him saying his first word, which was Mama!

hey its tara, here is the website i was talking about where i made the extra summer cash.......... the website is here