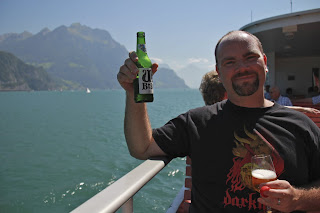 Nick turned 37 years old yesterday, and although he didn't want anything including acknowledgement of the day, he surprised himself in how much fun he actually had. The day before his birthday we had a family celebration, since he had class that night. I made spicy thai food and his favorite, carrot cake.
He strictly stated to me that there was a no present rule, but I can never hold to that rule. Nick opened up his presents which were simple and funny. Coretta bought him a big bag of snickers because he tends to have one a day and has become a running joke at our house. Geno made him a card and a photo frame of him in his costume with the magazine title "Super Dad." Mom then made another magazine cover with Charlie and Coretta which he could hang in his office.
The actual day of his birthday, his good friend Bob took him out for lunch and his other close friends Christian and Dave took him for beer and hamburgers at the pub. We followed this up with watching his favorite movie of all time, American Beauty.
Days like these make turning a year older a little easier. We love you Nick!
Posted by Unknown at 2:25 AM