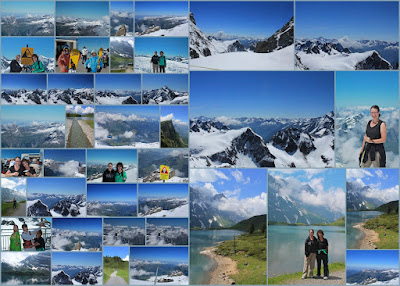 Mom, Bridgette, and Nick woke up early and decided to visit Mount Titlis. No Switzerland adventure would be complete without a visit to the mountains. Mount Titlis is approximately an hours drive from our house, and then a gondola up to the highest point of the mountain (10,000 feet above sea level). The gondola is constantly in motion, and you have to jump in. Mom and Bridge did just that. Nick, finding the gondola to be full, trailed after them.

Once to the top, they took some pictures of the amazing mountains. They couldn't have asked for a better day. Sunny blue skies and surrounded by mountains. They decided to sit at the cafe and have a Cappuccino, or a beer in Bridgette and Nick's case. Once they finished their beverages, they started their walk down the mountains ridge.

Mom and Bridgette did exceptionally well for their first mountain hike. There was only one time when my Mom felt she needed to stop due to the change in altitude. The key here is a lot of hydration.
As they continued their hike, my Mom noticed that she had lost her sweatshirt. She contemplated just leaving it there, but decided to back track the way they had come to actually pick it up. Along the trail, they heard old women yodeling back and forth to one another which is something many have not experienced before. Once in the restaurant, which was overcrowded with tourists, they found a place to sit and ordered the famous Alpine macaroni which I suggested they try. It was so popular, that they had run out earlier, so they opted for the German bratwurst.

Once lunch was finished, they proceeded to take the gondola down which is somewhat like an elevator where they cram thirty some people in. It is not for the clastrophobic or the person with heightened sense of smell. The smell of body odor and moth balls seemed to permeate the air. Moth balls being a smell my Mom hasn't smelled since her childhood.

Once down, they drove the hour back and both said that the mountain adventure was the highlight of the trip. Nothing like being 10,000 feet above sea level to put things in perspective.
Posted by Unknown at 12:44 AM