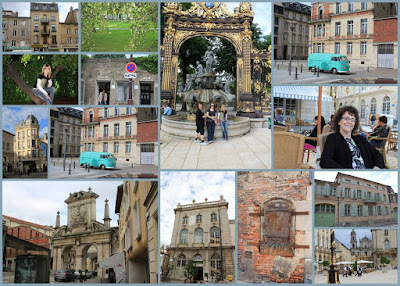 While my sister and Mom were in Europe, Coretta and I decided to take them for a quick weekend trip to Nancy, France. Knowing that this was not a big tourist town, I was unsure of what to expect. We awoke early and got in the car by nine am for our three and a half our drive. I first plugged the address of the hotel into my navigation system to only find out that this particular hotel was not recognized.

Not knowing what to do, I went back up to the house to see if Nick could help me get in the vicinity of the hotel. Once to Nancy, France I knew that riving in France was difficult, but this experience proved to be the most challenging. In France, the streets are not clearly marked, the streets are narrow, and drivers are impatient. Although we stopped to ask people directions, no one gave us good directions and some could not understand us.

We finally did found the hotel tucked back near the water canal, parked (which is not easy due to their narrow garage spaces), and checked into the hotel. The Suite Hotel, as it is called, was quaint and clean and had beds for each of us, including a trundle bed tucked underneath the master bed. Once checked in, we decided to eat at the Hippotomus which I know had good burgers and fries.

Once seated, we decided what we wanted to order, and ate. Our waiter could not speak very good English and our French just plain sucked. When our burgers came out, they were done bleu (which we later found out was rare). Mom and Bridge returned the burgers to have them better cooked, and then we decided to find Nancy Square. 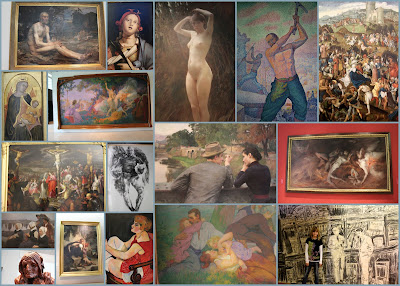 The next morning, we had breakfast in the lobby, and then procceded to find the Museum of Fine Arts. From the research I did, it was ranked very high by many tourists. We found it in the Nancy Square and toured the museum, fascinated by the size and grandeur of the paintings. We saw original works by Picasso, Monet, and Frintz and art from the Medieval, Renaissance Age as well as different styles of painting such as oil, watercolors, and pontilism.

Afterwards, we toured the gift shop and Mom and I both purchased replica items of things we had seen by Frintz and Picasso. 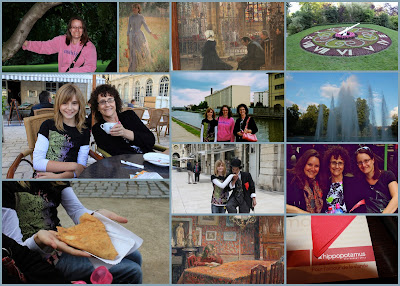 After much walking (sometimes in circles) we came across the wrought iron gates with gold leaf designs and made our way through the entrance. Once in the square was beautiful. They had several open air restaurants as well as museums and gardens. We toured the garden which was stunning and included rose bushes and a small zoo.
The small zoo had monkeys, birds, and a special little pony that took a liking to Coretta. He kept coming up to her as if he wanted her to pet him, which she did. Only to find out that the pony was hungry and tried to eat her Espirit bag with her tank top in it. Luckily he was unsuccessful in eating her tank top, but he did get some of the plastic and left two teeth holes.

Along the way, Bridgette and Coretta sampled authentic french crepes which are really one of the best French inventions. We then had dinner, and made our way back to our hotel to make sure we had a good night's rest and start early the next morning. 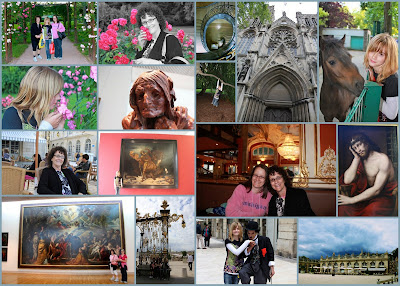 The next day, we had breakfast and checked out. I knew we needed to find a gas station, so I plugged in my address into the naviagtion system, and off we went. everywhere we drove, we could not find a gas station anywhere. I started to get a little worried that we were going to run out of gas, so we stopped at another small village along the way. Coretta and my Mom went in to ask for directions, but they were lost in translation. The women must have thought that we were looking for the train station instead of the gas (petrol) station.

I decided to park the car and go into the train station and ask for directions. Once in, I stood in a long line only to find out once I got to the front that the woman spoke no English. Feeling frustrated, I walked away, but Bridgette, bound and determined to get us home, was approached by a younger French woman who offered to have us follow her to the gas station and help us. We did, and were quite grateful that she was so kind.

I went to fill up the car, and it would not take any of my credit cards, and asked her to come and help me once again. She offered to try her card and have me pay her in cash. I took her up on her offer and find that the machine we were on was not accepting her card either. After a few tries, it did eventually take it, and I payed her 70 Euros and tried to tip her, which she would not take. Without her, I don't know what we would have done. Needless to say, we were happy to be back in Switzerland.
Posted by Unknown at 3:48 AM

Hi, good snap & nice blog, i will visit ur blog regularly, i think u should go for this link to increase visitor. BTW keep posting & happy blogging.