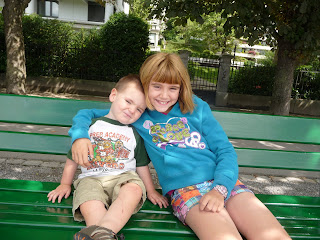 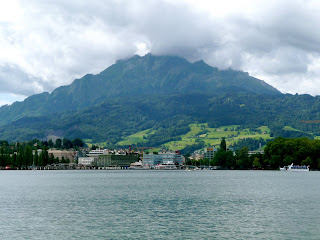 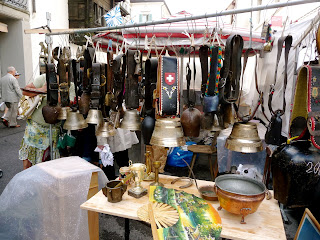 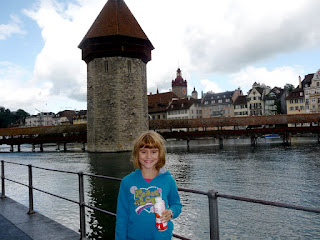 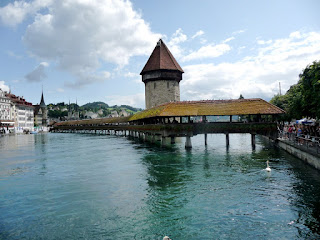 On Saturday, the family woke up early and jumped on a bus and a train into Luzern for their weekly farmers market, to stroll the lake walk, and the vendors at the Blue Balls Festival. Geno did surprisingly well on the train and needs to sit by his sister preferably in a window seat so he can point out all the cows, water, and trees that he sees along the way.

Once to Luzern, we made our way out of the train station to the old part of Zug and spent the morning browsing all of the different products available at the farmers market. Along the lake walk, there were several other vendors sel 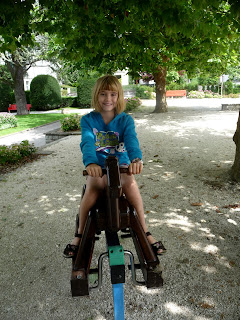 ling jewelry, clothes, sweaters, and hand made crafts as well. We ended up spending a little time in the park where Geno and Coretta had a chance to swing and sit on the rocking horses. Horses have become one of Geno's new obsessions ever since he saw Cari, better known as Coretta, riding a real one while back in America.

We then decided to have lunch. Nick suggested that we try some of the food vendors down by the festival, but these wer 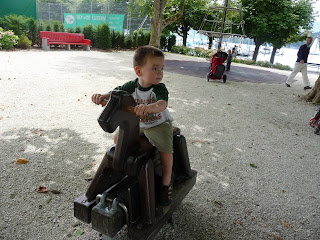 e not up and running for lunch. I, then, suggested that we venture out and find this wonderful Mexican restaurant we ate at when we were in Luzern a year ago for our Look See. We walked around for quite a while, without any luck. We found the park where many people gather around and play chess, but no restaurant. Finally, realizing the window we had with the kids before their starvation meter turns on was expiring, we decided to head back. It was during this stroll, that we came across the restaurant almost by chance. Or not chance if we factor in that I was praying to 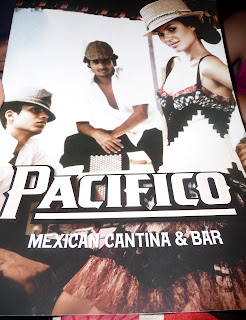 Saint Anthony. When I told Nick this, he said "You need to save your prayers to Saint Anthony for the big stuff." I said "No, way. Something was lost that we needed to find. It was just as I had remembered it with it's Spanish murals of women dancing painted on the walls, the red leather chairs, the open airy feel. I now know that the name of this restaurant is the Pacifico: Mexican Cantina and Bar located at Pilatustrasse 15 in Luzern. Once we were seated at our table, Geno was fairly well behaved and waited for the food. Our waitress graciously brought us a basket of bread after seeing the famished look in our children's eyes. In fact, Geno was horded pieces by the two's or three's. The food was just as we had remembered it exactly one year ago. Fresh and lots of it. Coretta and Geno shared the chicken quesadilla which actually resembled more of a fajita, Nick had some kind of chicken dish with mole sauce, and I had their traditional burrito which had chicken and potatoes in a red sauce. 140 CHF later we left satisfied and happy. 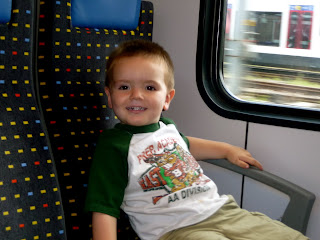 We then were going to take a boat ride home, but realized that Geno may not hold out for a boat ride two hours in length, so we jumped on the next available train back to Cham and then a bus to Hunenberg. It was a great way to spend a Saturday afternoon.
Posted by Unknown at 1:44 PM