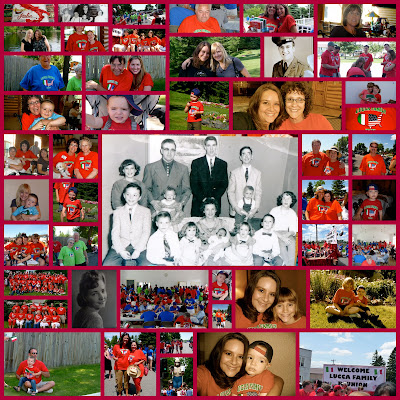 The Lucca Family Reunion was held on 4th of July weekend in International Falls, MN. We stayed at the Holiday Inn for two nights. The first night, some of the Lucca's were busy working on the float over by the Coca-Cola bottling company and others gathered at Grandma Lucca's to visit. That night, the family gathered at the Holiday Inn for swimming and the famous Border Bar pizza.

The next night, we had breakfast at the Holiday Inn and were told to meet my parents in the lobby at 11:00 am which we did, and we waited, and waited, and waited. It seemed that many more family members were waiting as well. It seemed that everyone had a different story and different meeting time/place, which obviously produced confusion and frustration. Once my Mom showed up, we were told to drive to the Coca-Cola bottling site which we would then board the float down to the start of the parade. Happens to be, that we loaded the kids, I drove down to the football stadium, parked, and walked to the start of the parade.

Once there, we noticed the sea of Lucca's on display with the dominant colors of red (Geno's family), lime green (Tranquillo's family), and blue (Livio's family). Many joked about which color was the most dominant which appeared to be ours, since Geno had fifteen kids, but Livio was not that far behind with ten. It was great talking and reminiscing about old times, because many of these people present had made a big impact on my life. Because my Mom's family was so big, they were very close, and I would spend two weeks of every summer there on Rainy Lake with my family.

Once the parade started, they chanted L-U-C-C-A what does it spell? LUCCA! The young ones on the float threw candy out to the spectators, and by the end we had won second place and received a 100.00 cash prize. Once the parade was over, we walked down to the park where the gigantic statue of Smokey Bear is, and walked around. It is here many years ago, I remember entering the races and winning first prize. It is here where my daughter enjoyed the carnival style games and won two stuffed animals.

Once done there, it was off to Rainer hall for buffet style food provided by all Lucca's, a short program, and time to visit and look at all of the pictures and memorabilia on display. Afterwards, many people went out to Sha Sha Resort where a regee band was playing and danced the night away. It was a great time had by all. I am glad we could make it.