Our Family Trip to the Gunflint 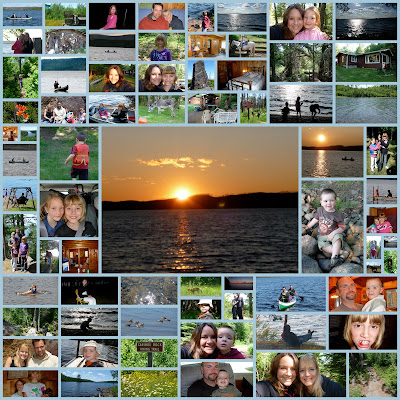 Once we left International Falls from the Lucca Reunion, we decided to take our niece Emilia with us for 7 days up the north shore, destination Gunflint. That day we had 7 hours of driving ahead of us which is not fun. Geno was pulling his sister's hair, so he needed to be separated from the girls, so we put the seats in the back and he sat alone with the luggage. Erin and Ryan drove with us most of the way and we stopped in Ely, MN for some lunch. Once we finished, it was back in the car. When we finally got there, we checked in and were pleasantly surprised by our cabin The Birch. We had stayed in White Pine previously, and knew we love it at Heston's. Once we checked in, we made dinner, had a campfire, and went to bed.

The next morning, Nick made pancakes for the girls and was about to cut Emilia's and pour syrup on the top. I proceeded to stop him because she likes to dip her pancake into the syrup. Nick looked at me and said "Emilia is flexible" which Emilia retorted "Well yes I am. I can do the splits for a whole 5 minutes!" Afterwards Erin Ryan, Emilia, Nick, and Coretta decided to hike to Magnetic Rock. Along the way, it was clear that the damage done from a forest fire had still left it's mark, but they also saw beautiful wildflowers. About half way down the hike, you see this huge rock which is coined the Magnetic Rock where people have actually put magnets on it. The question is, How did it become magnetically charged? After the hike, they came back and swam, did some canoeing, and had a campfire.

The next morning, Erin, Ryan, Coretta, Emilia, and I went on a hike to Caribou Rock. This one was a little more scenic and the terrain was difficult at times with debris, tree roots, and boulders in the way. At one point, we needed to descend a very small area that went straight down to get to the lake, but we did it. I have come a long way since the year I wouldn't go down the ladder with my fear of heights. It was so calm and beautiful down by the water that it inspired me to jump in. Since we all forgot our suits, I improvised by hiking my pants up and taking my shirt off (sports bra left on) and swam in the water. It was so clean and clear. Now, Emilia and Coretta weren't about to swim in their underwear, Erin (lets just say didn't have appropriate attire), and Ryan was just plain chicken. When Emilia finally stated that I was making her uncomfortable, I instructed everyone to close their eyes, put my dry shirt over my wet sports bra, and we climbed back up to our car. Along the way, Ryan stopped at the Trading Center and bought an ice cream treat for the girls. On the way back we were lucky enough to even see a fox. Once back, the guys went into the cedar wood sauna, we built a fire, had dinner,
and called it a night.

The next morning, before Ryan and Erin were set to leave, Erin ran out of feminine hygiene products and asked Ryan if he would go up to the lodge and ask Barbara where she might be able to purchase these. Ryan went into the lodge, proceeded to ask Barbara the question, and she answered with "we have them here. What kind would Erin like?" Ryan embarrassed fumbled for the right thing to say and said "I'll take the whole gambit." Barbara then proceeded with "Why don't you have Erin come up here." Erin never did go. Must be the Swede in her that causes her to get paralyzing fear of these types of situations, sent Nick. Nick went in and asked Barbara for the right product and said "How many men does it take to get a feminine hygiene product?" She laughed.
It was hard to see them go since I only get to see them once a year, but it makes the time we do spend much more valuable and special.