Emilia and Coretta horseback riding for the first time 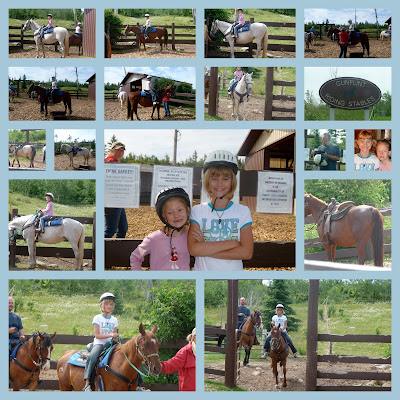 Coretta and Emilia had the great opportunity to go horseback riding at the Gunflint Riding Stables while at Heston's Lodge. Ever since we drove by the stables on our way to the cabin, it was really all they could think about. The second day of our stay, I booked a one hour riding session for Coretta, Emilia, and Nick. Since the age requirement is seven, they must also be accompanied by an adult. Me being somewhat skittish of horseback riding, finally convinced Nick to take them. Geno and I stayed back and took some pictures before they left. As soon as we got to the stables the morning of the ride, Nick had to fill out some paperwork and then they brought all of the horses out.

Emilia was the first person to be called up and get her horse. Her horses name was Houdini, and was the biggest horse they had. They gave her a switch to hold in case he misbehaved, and went through all riding procedures previous to their assignments. Emilia mounted her horse and was off. Coretta then was able to mount her horse. Her horse's name was Daisy. At first Coretta was a little nervous, but slowly became comfortable with her horse. the last one to mount his horse was Nick. His horse's name was Sourdough. They then proceeded to the trail on the National Superior Forest for some riding and spectacular views. Once back, Emili and Coretta were trying to think of ways that they, too, could own a riding stable. Above is a collage of pictures with the horses.