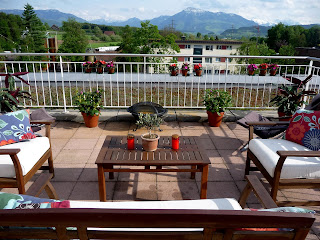 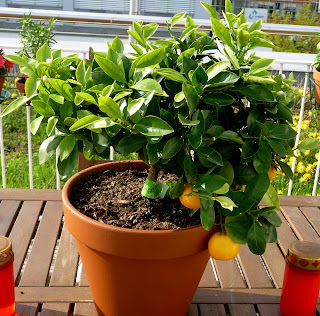 This year, I wanted to try and make my patio very welcoming by adding flower, fruit, herb, and vegetable container gardens to the landscape. That is one thing that I miss back in Minnesota are my outdoor plants. After doing some research, I 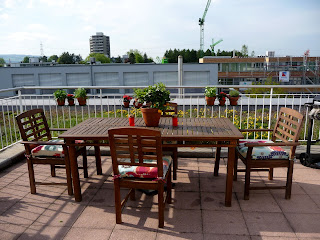 learned that almost anything can be grown in containers and thrive well. The list contained rhubarb, strawberries, blueberries, raspberries, tomatoes, green onions, peppers, lettuce, radishes, zucchini, cucumbers, and even trees (the dwarf variety).

I decided that I would plant some rhododendron's, azaleas, herbs (sage, thyme, basil, oregano, rosemary, mint) as well as an olive bush. I thought that blueberry and raspberry bushes as well as an orange bush would be suited well on the patio with lots of direct sunlight as well as two tomato plants for cross pollination. So far, I have almost 50 tomatoes! I also planted beets, chives, peppers, and zucchini today.

So far, this is what my garde 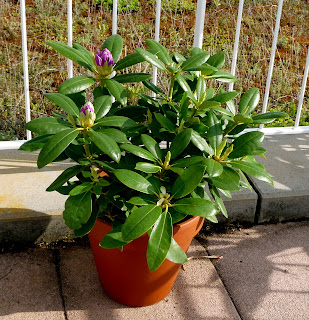 n patio looks like. Who would have thought that you could create an inviting outdoor space without a yard. I can't wait to have my first barbecue party on Saturday. We will be hosting 20 people.

As some of you know, we were trying to grill on the patio last weekend when all of a sudden the grill burst into flames. Nick ran downstairs and started throwing water on it, but it would not go out. At this point, he asked that Geno, Charlie, and I leave while he tried to contain the fire. I decided to run over to my neighbor Ronnie's house and see if Ron was around to help. Sadly enough, we didn't even know the number to the fire station. Now I know, thanks to my friend Adrian which let me know the following: 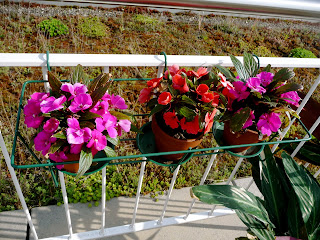 You have to remember one number: 112. This number works from all over Europe, i.e. EU including Switzerland and other countries. 112 is the equivalent to 911 in the US and Canada. Over here, some cantons/regions/towns still have different call centers for Police, Fire Service, Ambulance, hence the various numbers (117, 118, 144). However, if you ... Read Moredial 112 in Switzerland you will always be connected to the police and they will pass you on to the corresponding service. In GSM cell phone networks, 112 works virtually all over the world. Apparently even 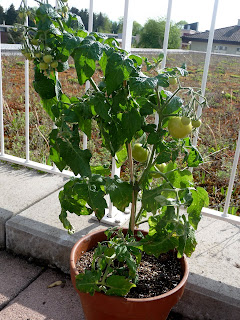 in the US and Canada - you will be redirected to 911. BTW: a fire in Switzerland has inspired another band to write a classic song: http://www.youtube.com/watch?v=9jp3de50_d8 Hopefully this will not happen to any more expats and if so, they will be prepared.

I then called Nick from Ronnie's house to find out that it was contained. He said never again will he use a gas grill, hence I bought charcoal today.
Posted by Unknown at 1:23 AM