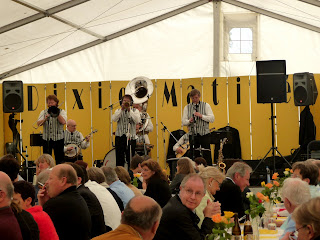 Today we decided to meet the Burkert's and the Barger's for a little Dixieland Jazz, food, and conversation. We got there around 11:00, and as you walk into the tent, they had a red carpet laid out for the guests as they entered the tent. It cost 10 francs per adult and all the kids could enter free of charge. We were able to get a seat, order food, and have a beer or two as well. As the adults were in conversation, all of the kids, ages ranging from 2 to 10 were able to play, until around 1:00 pm when the napping time came where Geno and Josh needed to get home and lay down. Overall, it was a great day, until later around 5:00 pm.

Once home, Nick and I decided that we would grill chicken for supper. While lighting the grill, it started on fire and the whole thing started up in flames. Nick and I were unsure what to do. He got water and tried to douse the flame, but realized that until he shut the propane off it would continue. The fire started below by the tube connection to the propane tank and the actual grill. Nick told me to evacuate with Geno, while he tried to deal with the situation. I s 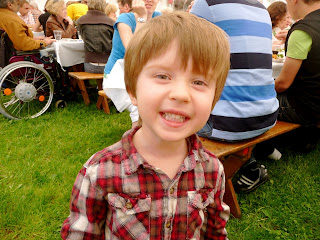 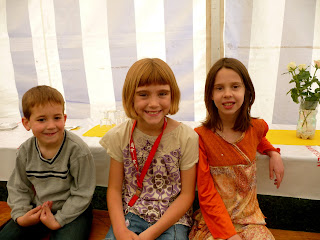 cooped Geno up, and out the door we went. I decided to walk over to the Burkert's and see if they were home and if they knew the number to the fire department. Sadly, they didn't either. After a few minutes, I called Nick back at home, just in case he was able to get the fire contained. He said that he did and that it was okay to come home. How scary. Scary that we ultimately could have burnt the apartment down, the grill could have exploded, and Nick could have had an accident. Not sure why, but I had this vision 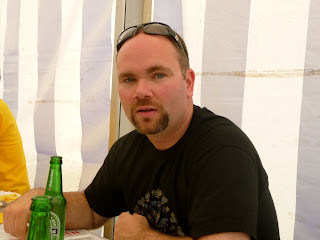 that he would end up disfigured by the flames. Horrible. Ronnie and I have both decided that it is pertinent that we post all of the emergency numbers in Hunenberg in case anything crazy like this happens again. All of you expats in Switzerland need to remember 112. This number will get you in touch with the police, fire station, and ambulance. It is just like 911 in the States. Unfortunate that it took an experience like this to find out the number though. Needles to say, Nick is thinking charcoal grills might be the new wave of the future.

The irony is that we are hosting a family barbecue next weekend.

Here's a short video of the Dixieland Jazz Band: