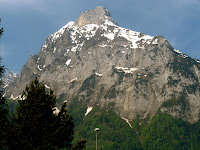 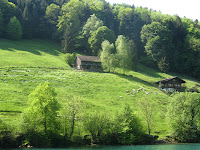 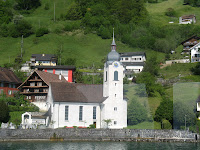 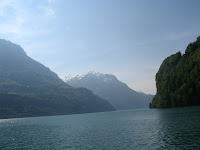 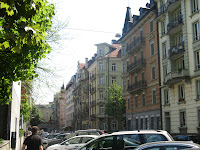 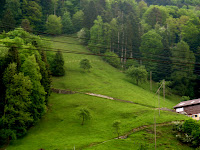 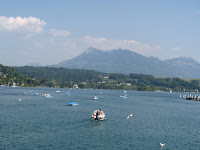 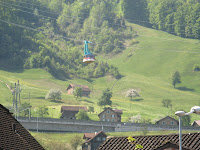 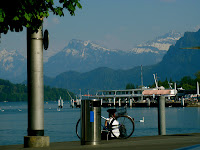 If you are interested in really seeing the large city of Lucerne, the best way is by boat. Nick and I decided that this would be our one adventure that we would be sure to make time for after all of our scheduled meetings and it was well worth it.

We were told that you can take a train ride to the city of Fluelen from Zug at 8:32 am and then get on a boat that takes you on a three hour tour of the city of Lucerne. The train itself was a very pleasant experience and many people were travelling since it was holiday in Switzerland. No wonder the Swiss are so happy. They live in one of the most beautiful places in the world, and are given time to explore it. Unlike us Americans that are overworked, underpaid, and overextended.

Back to our boat ride...we rode first class which gave us the best views. Many people were there at each stop along the way waiting their turn to board the boat. On the boat itself, you can order food, drinks, desserts, as you spend time soaking in the sun and the exceptional views. What a great way to be lazy!!

The mountains and lake views are absolutely breathtaking. It is amazing to me that so much beauty and nature can be congregated in one region. As we sailed along in the boat, we saw much of the countryside as well as sheep grazing. We could also hear the bells of the cows as they walked along the countryside. These bells are very common in Switzerland and can be very ornately decorated. We saw some people para sailing. I wish I wasn't so afraid of heights because it looks like so much fun. We also saw a cable car that must have some of the best views of the area.

Each stop along the way, we saw several quaint little villages with many shops, hotels, and places to eat along the way. If you wanted to, you could easily make a day or two of it stopping into these villages and exploring as well.

Once you step off the boat into the city of Lucerne, you see that you are in the heart of the city. Here you can definitely feel the presence of the big city. It is here that Nick and I discovered that the bathroom break comes at a price. While visiting the train station, we wandered down to the WC which here was called Mr. Clean. here we realized that in order to go to the bathroom, it would cost us two francs, or one franc for the pissoir. That was the only toilet that cost money that we ran into on our trip. 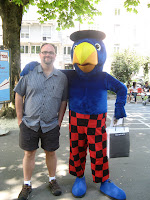 the surrounding areas. We saw libraries, cafes, pubs, eating establishments, as well as several child-friendly parks. Nick even made friends with a parrot. He'll do anything for his children!

Here are several photos from the beautiful city and Lake of Lucerne.
Posted by Unknown at 7:58 PM