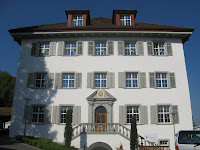 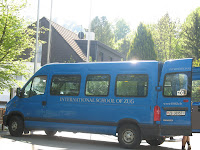 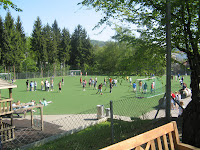 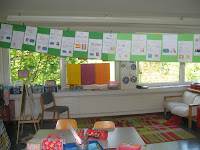 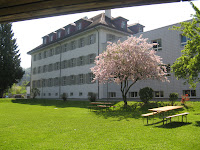 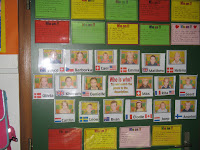 One of our first appointments scheduled our week in Switzerland, was with the head master Mr. Winter at the International School of Zug. We arrived at 9am and were promptly greeted. We soon found out that the school itself used to be a monastery.

We also learned that the school is a pre-K through eighth grade school that houses 700 students. In the third grade they have four classes of 20. We also learned that 50% of the students are English speaking whereas the other 50% come from many different countries. Not only is the student population diverse, but 150 new students enroll each year!
Music is also a strong emphasis as well. Coretta will start with playing the recorder and the following year can play another instrument.

The curriculum follows the International Baccalaureate Program with a strong emphasis on global issues and your part in the world. They have even started a school in Nepal for children who are homeless.

They take several field trips to museums as well as a three day trip as a class in the mountains in the beginning of the school year. When they get older, they take week long trips to Greece or Italy. How great is that!!

They also have a strong emphasis on drama and Coretta can play basketball, soccer, track, as well as take piano, skiing, and swimming lessons. Overall, I think she is really going to thrive in this environment. To the right are some pictures of her new school.
Posted by Unknown at 7:09 PM