Our Trip to Heidelberg Germany 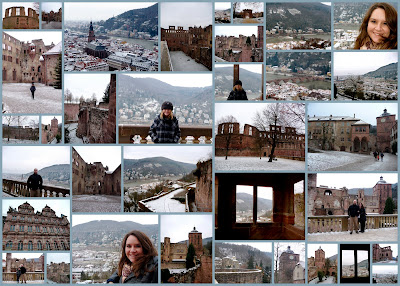 The second day, we decided to tour the Heidelberg Castle which is the oldest castle in Europe. It has been in existence as early as the 1400s when Ludwig V was King. We had to take a funicular up to the top, and Geno became quite scared of the underground tunnels we had to go through to get to the Heidelberg Castle. Once there, we bought our tickets, and first toured the castle grounds. The grounds were magnificent even in winter with many areas to sit and gorgeous views of the city below. Once in, there were beautiful buildings with statues such as the one with all of the allegorical figures. Once to the Great Terrace, one had the most breathtaking view of the city of Heidelberg and all of it's major monuments and churches as well as spectacular views of the Neckar River with the old historic brownstone bridge. Although it was quite cold this day, we all handled it fairly well, and was well worth taking the time to see. We can now say we were one of the million people who come each year to take a look at the castle. Although we didn't run into any royalty, princesses or knights, the ambiance of this place definitely exuded their presence. 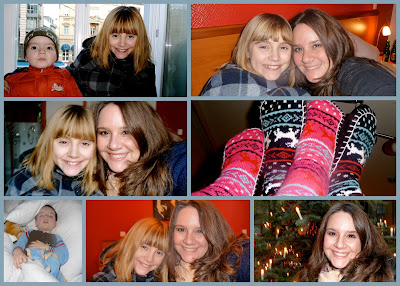 The first day, we drove about 3.5 hours to Heidelberg and all went well. Geno didn't puke in the car (thanks to Dramamine) and Coretta even fit in a nap and some time to read. Once there, we checked into our hotel called the Hotel Bayerisch Hof which was located right in the heart of the old aldstadt part of town. Once settled, we ventured out to do a little shopping, but the 8 degree temps proved too cold for Geno, so Nick and Geno went back to the hotel while Coretta and I shopped along the historic promenade of pedestrian boutiques. Coretta bought a nice wool jacket from her favorite store called Pimpkie, we found a teddy bear for Geno, and some wool socks for Dad. Coretta and I even managed to find some Christmas sock slippers. After looking at several of the Christmas Markets on display and admiring the quality craftmanship of the merchandise, we made it back to the hotel for some Chinese take out. While I worked on singing Christmas lullabies to Geno and putting him to sleep, Coretta and Nick ventured out into the cold once more to do a little sightseeing and experience more of the Christmas Markets. At night the castle is lit up and is an amazing sight to behold. They found a great place for hot chocolate and gluewin (warm spiced wine) and took in the sights before coming home. 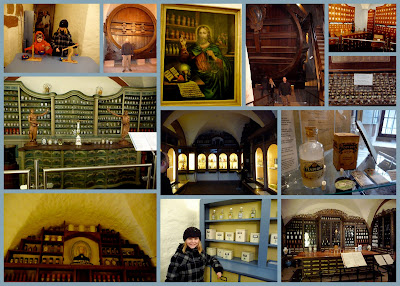 The other interesting place that we toured was the Apothecary Museum which was located on the grounds of the Heidelberg Castle. The Apothecary remains were once housed in Munich, but moved to Heidelberg permanently after the bombings in Munich in the 1930's during World War II. This was one of Coretta's favorite places we went. Being interested in healing and health, as well as wanting to be a doctor, she found this place quite amazing. She loved smelling all of the different herbs and was shocked that these can be grown in the ground and actually fight off sickness or death. Some of the medicines on display were even said to be blessed by the Virgin Mary herself. We also saw a painting of Jesus as a pharmacist on display. Geno and Coretta also enjoyed the kid friendly part of the museum where they could balance different things in the scales. 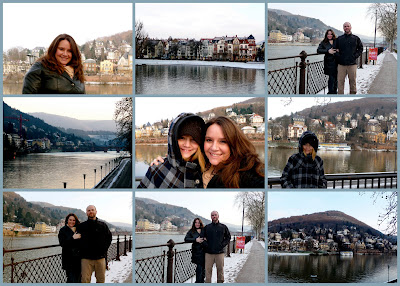 We also took a stroll along the scenic walk near the Neckar River. Even though it was cold, it was still beautiful. Seeing all of the beautiful homes nestled along the riverbank was beautiful and romantic. In the summer, they have boat tours of this area on the river and would definitely be worth the time. we then were able to see the old historic bridge before making our way back to the old part of the city. 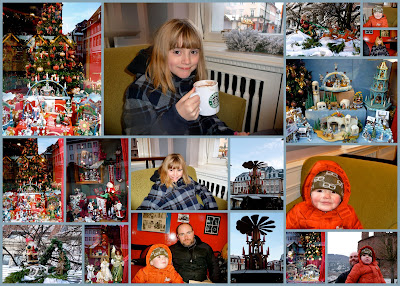 As we walked the streets, we ducked into a Starbucks for some warmth and a treat. Geno's cheeks were so rosy from the cold and he happily sat down to get a much wanted reprieve from the biting cold. As we sat there sipping our hot chocolate and coffee, we could see the Christmas Markets reopening for business. Afterwards, we walked around and saw many items for sale such as candles, German Christmas Pyramids, Nativity scenes, ceramics, pottery, knitted sweaters, hats, and gloves. Nick bought me a beautiful hand made Alpaca wool sweater made out of llamas wool and is authentic and one of a kind. Alpaca wool is as soft as cotton and as warm as regular wool. The difference is that there are only two times during the year that you can attain wool from the animal to make sweaters, hats, and scarves, and only the top of the head and the neck can be used. I will cherish this Christmas present for many years to come. 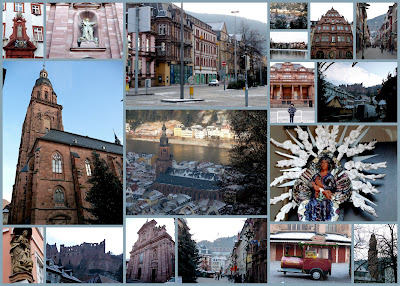 If the Christmas Markets, the Heidelberg Castle, and the old part of the city not enough for you, the historic churches and monuments are also beautiful to behold. One church, in particular called the Holy Spirit Church housed both Roman Catholics and Protestants in the walls of the church with just a wall separating the two. This church has been burned by the French, but is one of the only historic churches to remain intact after World War II. In fact, many of the Palatine tombs are in the church itself.

Overall, this was a great family destination, and we plan to come again to take in the oldest university in Germany as well as tour the student prison. Thank you Nick for planning this trip for me. It was such a wonderful time.
Posted by Unknown at 12:46 PM