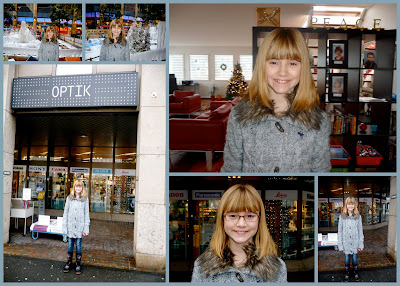 Coretta had been complaining of dizziness and headaches for about a month, so we brought her into the doctor and found out that she had very low blood pressure. The doctor said she needed to eat red meat three times a week. Ironically, this is one part of our diet that has changed here. we do not eat red meat. She stated that she can also take a multivitamin three times a day and she should be fine. Since Coretta has started her vitamins she has been feeling much better.

She further stated that she was having some trouble reading the board at school and to rule out that the headaches weren't a byproduct of her needing glasses, we scheduled an eye appointment with an opthamologist. While at her appointment, they covered one eye with an eye patch and had her explain which part of the circle was open (since the letter idea does not translate too well for English speakers) and then she took a circular object with a stick and covered each eye simultaneously asking what she saw. Next was looking at objects such as cars and cows and finding out if the images were clear or blurry. they then flashed a light into her eyes as well as being asked what she saw in a few ink blots. Afterwards, the woman told us that she did see eye strain and when this happened her eyes went inward which would explain seeing double at times and the faintness and dizziness. She then gave her eye drops to dilate the pupil so that the eye doctor could further examine her eyes. He stated that her little white speck in her eye was not causing any problem with her vision and would just be there which was also good to hear. She hadn't had that checked out since she was a baby. He stated that she did have myopia which is near sighted and that she would benefit from glasses especially when reading and at school.

We then went to the Photo Optik Grau in Zug to pick out her frames. We first went to Feldmans, but they looked really cheap and ugly. When at the Photo Optik, the eye specialist sat down with us and trued on several different styles of frames. Coretta decided on a light brown pair. We were told to come back tomorrow and they would be ready.

When we returned, they fitted her glasses around her ears, gave her a nice case, as well as a special case for them. She also received no glare lenses and scratch resistant lenses which will help in the longevity of the lenses.

Once I left, the bill cost 508 francs. Nick thought it was originally 200, but with the frames and the lenses the total was more expensive. We were informed however that the canton would reimburse up to 200 francs of the total cost bringing the price to 300. What really matters is that Coretta is comfortable with them and likes them.
Posted by Unknown at 3:08 AM