Coretta Sledding in Engelberg with her Dad and her friend Hope 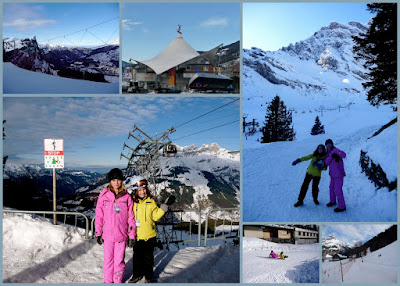 This past Sunday, Nick took Coretta and her friend Hope out for a day of sledding at one of the mountains. They drove to Sattel Hockstuckli which is about 30 minutes away, to find out that they have closed the sledding hills due to icy and dangerous conditions. That is the same experience we had at Zugerberg the other day as well. Nick decided that if they went to a mountain at a higher level, there would be snow instead of ice. They ended up at Titlis. Once there they were told that they would take the gondola up to the first area where they could get off and ride on these butt sleds that have a pole attached to it that allows you to brake and steer. It is about 3 miles down the mountain at the highest level, and then they could take the gondola back up. This went fine, until one sledder overshot his steering and ended up over the side of the mountain. They were informed that when that happens, they must close down the sledding to build the snow up higher on that side. Nick asked the girls what they wanted to do, and they decided to go to the next level where you get the toboggan type sleds and go down a wider runway which takes about 30 minutes to complete. Overall, it was a great day and Coretta and her friend loved it.
Posted by Unknown at 8:53 AM