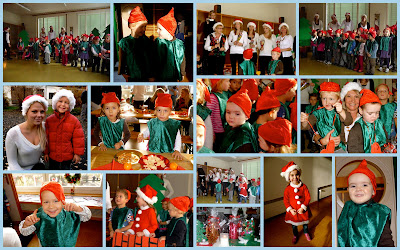 Today was the Christkindl Market for the Beehive International School. Since they will be moving to a new location on December 12th, what better than to have the Christkindl Market at the new location. The new school is located in Lindencham and was previously used by two kindergarten classes. It has two spacious rooms, a nice playground, as well as a place downstairs that has a lot of space for teacher planning and storage.

The Christkindl Market took place from 2 pm until 4 pm. The students immediately noticed the playground. They now have six swings, a wooden train, and a rope jungle gym in front of the school as well as all of the other equipment the Beehive International School already has at it´s current location.

When all the parents and students arrived, parents were able to look at all of the books at the Book Fair on display. If you purchased anything from the fair, they would automatically give a certain percentage to the school to buy even more books for their current library. The teachers also posted their wish lists for the classroom and seemed well received by the parents.

Soon after, it was ready for all of the children to put on their costumes and get ready for the program. All the children had a green velvet coverall and a red velvet hat to represent Santa´s little helpers, and one student was dressed in a beautiful red velvet dress with white trim, and she represented Santa. Once into costume, the children walked into the room set up for the performance singing their first song which was the Fire Truck, after Ms. Richarz announced the afternoon events. Although this song was not so Christmas orientated, the students have been learning about fire, candles, and matches, so it fits in with their thematic unit. Her is a youtube video of the song:

The next song was one entitled I am Special. Which the children sang and also had certain movements to. The next song, was This Little Light of Mine where the older students held real lit candles and the younger ones held cardboard replicas of a candle. They also learned and performed a song called Oh Light that they learned in English and German.

The last song of the performance was Feliz Navidad where the students wore their paper hearts around their necks and would have been a moving performance if you ignored Geno and his sidekick causing mischief. Look at the video below:

Afterwards, the teachers were presented with a gift and then we all proceeded to the next room for refreshments, conversation, and snacks.

The students clearly have spent a lot of time preparing for their performance and it was definitely a job well done. Thank you to the teachers for all of their hard work in putting this event together. It was greatly appreciated by the parents and students equally.
Posted by Unknown at 11:48 AM