A Day in the Life of Geno 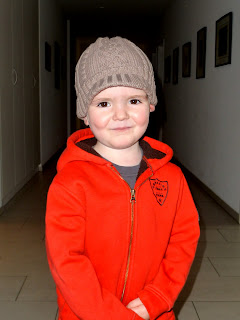 Geno is doing well in school. He is just shy of three years old now, and is talking up a storm. His favorite things to do are playing with his trains, toy cars, leggos, and watch the British children's television station CBeebies.

He is also s BIG fan of Mickey Mouse and Donald Duck and thinks his big sis is the best thing in the whole wide world. He loves to go for a walk to the playground and ride his bike in the neighborhood.

He also has a thing for anything football which includes wearing any of his football jerseys every day. We are using football interchangeably here since he likes European football (soccer) and American football.

Some of his favorite things to eat are chicken nuggets, potato fries (as he calls them), apples, carrots, and peanut butter toast. He loves popcorn and will pretty much do anything I ask if he is given this reward. He loves apple juice, but will still drink milk and water if I convince him that there is nothing else.

He still loves to be read to, but has a few favorites which are Dr. Seuss and The Humor Man which is about an ice cream man in the neighborhood. He calls him the Hama Man."

His favorite sayings are as follows:
He is definitely coming into his own unique personality every day. He loves life to the fullest. He is independent, strong willed, opinionated, funny, and not afraid to show his emotions. For instance if he is mad, he will stomp off into the corner of the house, cross his arms, and stick his bottom lip out so far, it almost touches the ground. All of this just far enough away to make sure we are seeing him.

Most of all, he is just my special boy who I love with all of my heart. Here is a link to the web blog that I have created for Geno's preschool: Beehive International Preschool
Posted by Unknown at 3:54 AM