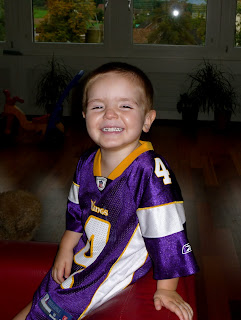 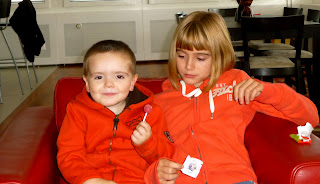 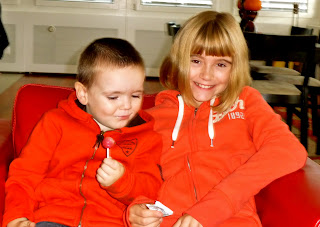 Nick has finally returned from his trip back to the United States and came bearing gifts for everyone.

First of all, we all received our Halloween costumes and they all fit perfectly. Never know if that is going to happen when you order online. Coretta also received a pair of black converse and black boots, an Abercrombie and Fitch sweatshirt (in case you didn't know, labels mean everything these days), and a lot of books which included a few classics like Johnny Tremaine, Where the Red Fern Grows, Number The Stars, and Coraline. She also received a Brain Quest workbook and Brain Quest flashcards so we can supplement where we feel is needed.

Geno received the coveted possession of all, with his number four Brett Favre Minnesota Vikings jersey. Although it is as long as a dress, he still wears it with purple pride. Amazingly enough, they do not have jerseys any smaller than an 8. Geno will have a couple years of growth out of it though.

Although I didn't ask for anything, Nick brought me back the most beautiful necklace and earrings set in the same stone. He also bought Coretta one as well.

Although he had fun in the States spending time with Grandpa Tom and seeing his old childhood friends, he was happy to be home with his family who equally missed him.

Below is just a collage of Geno sporting his new jersey! 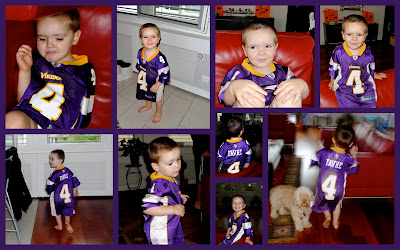