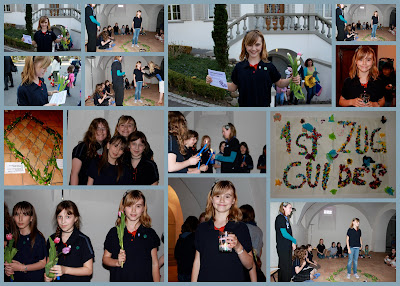 Coretta has been part of Girl Guides this year which is the equivalent of Girl Scouts in America. Today was her pinning ceremony which they called her Promise Ceremony where we all learned a little about the history of Girl Guides, which was started in the UK as a scouting group for boys, and realized that girls would benefit from the same type of group as well. Afterwards, each girl was pinned in a candle lit ceremony where they also received their certificate, flowers, and pins.

When Coretta read her Girl Guides Handbook, she noticed that the pledge asked her to pledge her "service to the Queen." Coretta did ask her teachers that since we come from several different countries outside of the UK, could they pledge to serve their own country or as Coretta put it "serve Obama." The teachers felt this was a good point and made the necessary provisions. They will be going on their first camping outing June 12th. Congrats Coretta! We are proud of you always.
Posted by Unknown at 9:37 AM