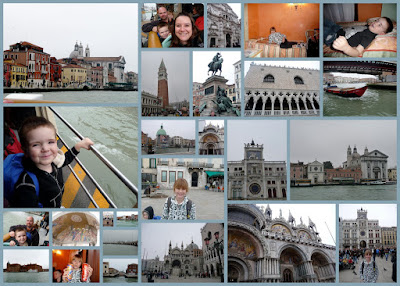 Last week, we woke up early to take a train, a bus, and then a train to start our nine day Mediterranean Cruise starting in Venice. The train ride was approximately six hours long with a train change in Milan, Italy. It actually went quite smoothly and Geno was in good spirits. Towards the end of the train ride, he kept saying, Do we get off here?" but that was much more bearable than him not sitting in his seat or throwing a tantrum. 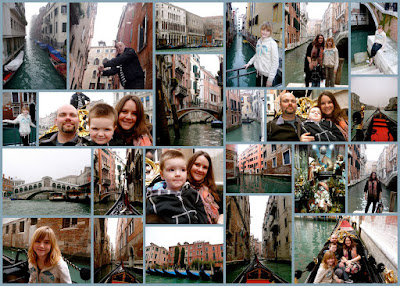 Once there, we needed to take a boat taxi to our hotel on the island of Saint Marco. The bus taxi part was simple enough to find and lugging our roller bags up staired bridges wasn't as bad as I thought it would be. When we reached the San Marco Port, we got off, and started towards the center square where our hotel was located. This proved to be quite challenging because in Venice, there are many narrow cobble stoned passage ways and the streets are not clearly marked. After asking the police for guidance, we found our hotel which was nestled in the heart of the city. 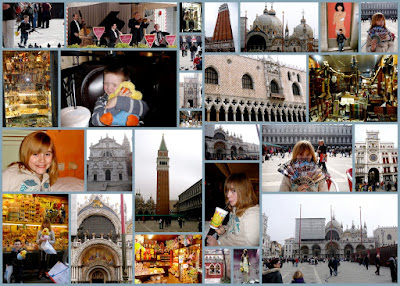 Later that night, we went out and did some exploring, admiring the old historic cathedrals, looking at souvenir shops, and taking it all in. The only nuisance we ran into in reference to peddlers was what I like to call the purse mafia. I am starting to believe that all big tourists cities have them. In Egypt it was the Camel mafia, in Paris it was the cheap souvenir mafia, and so on. The mafia in Venice was made up of Jamaican men who carried about fifteen different fake designer purses on their arms. They can be very persistent and bothersome. Needless to say, I never purchased a purse. 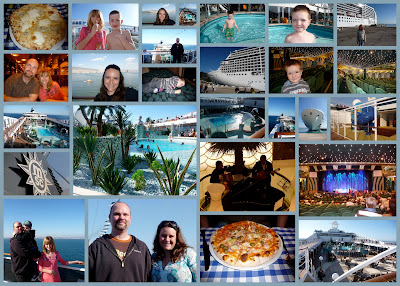 That evening we ate at a charming little Italian restaurant and went to sleep at a reasonable time, since we would be boarding the ship early in the morning. Once awake, we lugged our roller bags and backpacks again to the boat taxi area and had them take us to the right of portage for the MSC Cruise liner. Once there, we had to go through security just as you would in an airport, and then before you board, they take a picture of your family. I wasn't thinking that I would have actually purchased the professional photo, but it turned out quite well. Once to our room, located on the eighth floor we unpacked our things and enjoyed the view from our balcony. 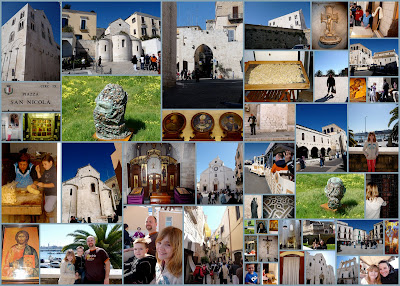 Our first port of call was Bari, Italy. We didn't book an excursion for this one, and proceeded off the boat to explore on our own. Once off, they had these little train tours that showed you different historical monuments where you could get off the ship and explore the city with a local guide. Our guide was named Conny. She first took us to the Saint Nicholas Piazza where we were able to tour the cathedral which just happened to be having Mass since it was on Palm Sunday. Outside the church, many children were selling olive branches throughout the center. The cathedral was beautiful and had several old relics from the church.

We then were taken to the old part of the city where we were able to see how authentic Bari pasta is made. It is tradition in Bari that the woman make the fresh pasta and put it in bags for personal use and to sell. As you walk down this narrow passageway, you see several old Italian women spreading out the dough, pinching it off, and letting it dry. These homes have little curtained entryways and was an interesting thing to see. 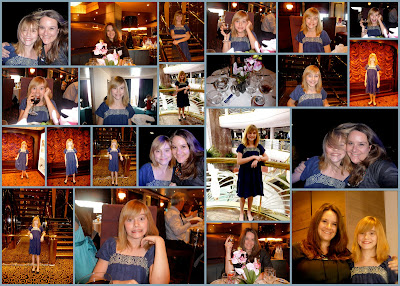 One of the evenings on the cruise ship, Coretta and I dressed up for the Captain's Gala. It is a formal five course dinner. Nick forgot his dress shoes, so he and Geno stayed behind. Above are a few photos of Coretta and I going to dinner. 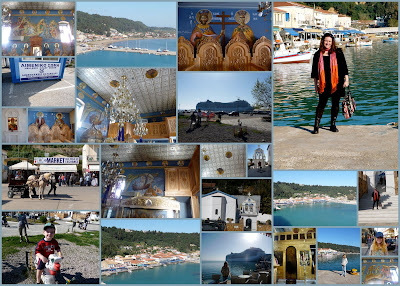 The next port of call we went to was Katakolon Greece. here we did not plan any specific excursion, so we toured the city ourselves. We were located in the center of the shopping area, so Coretta and I looked at all of the different items for sale. Coretta bought a mythological goddess doll, and Nick purchased me three beautiful scarves. We then decided to have a look at a Greek Orthodox Church built in 1988. Nick then sampled a Greek beer, and back on the ship we went. 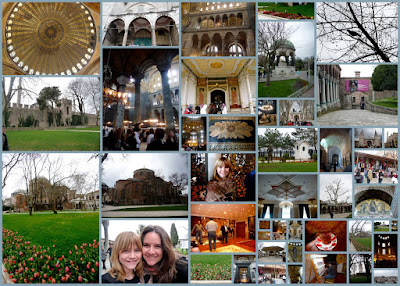 The next port of call was Istanbul Turkey. I must say that I never would have put Turkey on my list of places to see, but I was quite impressed with the city and the tour. For this trip, we bought the Deluxe Istanbul package where we first toured the blue mosque. We had to take our shoes off, and our guide explained to us important factors of the Islamic faith.

Once we were finished there, we headed to another mosque which is defined by it's six minarets. The Emperor wanted it to stand out, and believed having six minarets would do that. A long time ago, the priests would climb each of the minarets to announce time of prayer, but now they just talk through a loud speaker. This mosque was interesting because it used to be a Catholic church that was turned into a Muslim mosque. In many of the areas, you can see where the Christian faith and the Muslim faith are merged together which was very interesting. In the middle of the dome where there used to be an altar, is now replaced with Muslim altar that is not exactly in the center since it needs to be facing Mecca.

We then had a presentation on how Turkish rugs were made and sampled some apple tea. Afterwards we shopped around the Matis shopping center, and Nick bought me a new wedding ring that has almost 2 carats of diamonds and a huge citrine gemstone in the middle. Probably the most beautiful thing I own. Thanks for the birthday gift Nick! I will always treasure it. 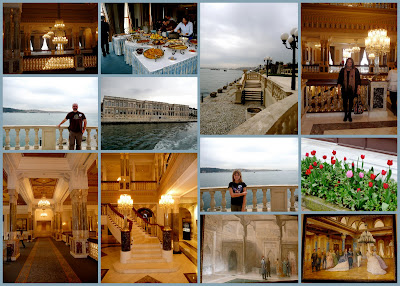 The next destination on our Deluxe Istanbul package was to have dinner in a palace. It was absolutely beautiful and breathtaking. It had marble floors, big staircases, beautiful chandeliers, high ceilings. The food was excellent as well. Great way to end a day in the city of Istanbul. 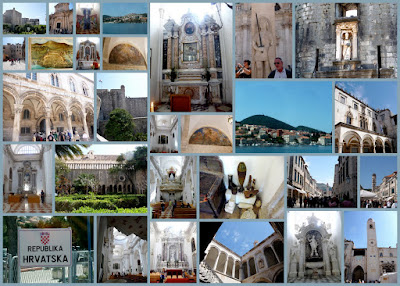 The next port of call was Dubrovnik, Croatia. As the famous English writer George Bernard Shaw once said, "Those who seek paradise on Earth, should come and see Dubrovnik." He was absolutely right. Be it the beautiful sea landscape to the old town square to the medieval walled city, it is a must if you go to Croatia. Once there, we toured some churches and saw the Franciscan Monastery and then made our way up the sea wall of the Medieval city. It is here that you have the most spectacular views of the sea and the landscape and was well worth the time. 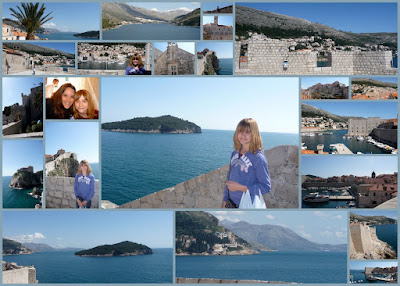 Above are just some of the pictures as we walked along the ridge of the sea walls. The pictures do not do justice to the beauty of this city. 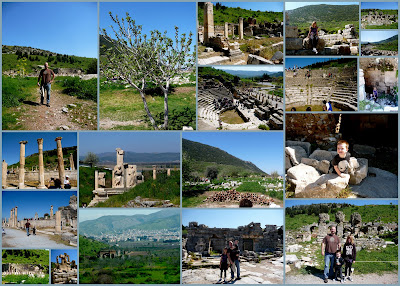 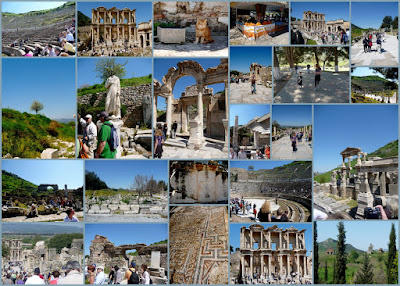 In Turkey, we also visited the ancient city ruins of Esphesus that was thriving in the year 1200 BC. This was probably one of the biggest highlights of Izmir Turkey. Usually when you hear that you are going to see ancient city ruins, it may be only a stadium, this ancient city was a two hour walk through homes, libraries, stadiums, Roman statues, and amphitheatres. The kids had a great time. Coretta stated "that this was her kind of a city. A rock city." 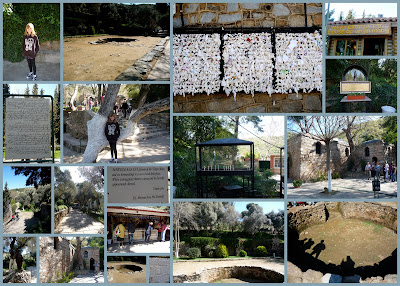 The last stop on our tour of the Mediterranean was a pilgrimage to the House of the Virgin Mary. It is nestled near the ancient city ruins of Ephesus. It is here where you can see where her childhood home was located and we were able to tour the inside of the old stone house that once housed the mother of Jesus. It is here that she spent her last days with John the Baptist. This was a great adventure with the family and look forward to our next cruise.
Posted by Unknown at 6:19 AM