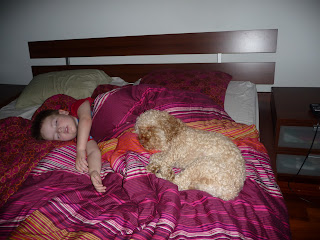 As many of you probably know by now, Nick left for the states on April 9th, with the expectation of being gone nine days, but he is still stranded in America. So far, it looks as though no flights are coming into Europe any sooner than Sunday, April 25th. This is the longest Nick and I have ever been apart and it is really getting hard. I hope that when they finally do give the go ahead for people to fly, that he will make it safely home back to his family.

Although his absence has been hard on all of us, his little Geno man is affected the most. From the first day that Daddy left, he just walked around the house saying, "I want my Daddy." He won't sleep in his bed, opting to sleep on Daddy's side of the bed. Poor little kid. I caught him talking into the battery charger as if it was a telephone talking to his Daddy. Thank God for skype, we can at least hear his voice. Nick stated that if he stays much longer, he is going to have to ask for a seat belt extender to fit on the plane. We miss you Nick.
Posted by Unknown at 12:22 PM