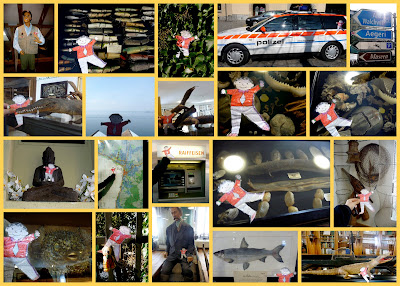 Flat Stanley has been visiting us all the way from America. More specifically all the way from Saint Paul, Minnesota sent here by Zoe Schearer. He spent today with Coretta and I exploring Zug, Switzerland on a beautiful and sunny day. We first went to the Coop Restaurant where we had steak and chicken nuggets, fries, and chocolate cake. Once we finished our food, we went down by the lake where Flat Stanley was able to see Lake Zug or Zugersee, do some sun bathing, and see may sights. Some of the things he was able to see were some exotic birds, the old part of Zug where there are cobble stoned streets, a butcher shop, and the farmer's market. We then decided to go to the Fisherman's Museum where he saw a fish hatchery where fisherman take fish from the lake, extract their eggs, nurture them from the tadpole stage until they are big enough to go back into the lake. Upstairs of the museum, we saw 80 year old fisherman's nets as well as several other artifacts. One fable in particular was most interesting. many, many years ago, there was a picture that surfaced of a half man half fish creature in the lake. Later on, they found it to be a fake. Just something the fishermen made to pass the time. We saw several other different kinds of fish, wobblers, and an authentic wooden fishermen boat. Overall, I think Flat Stanley had a great day! 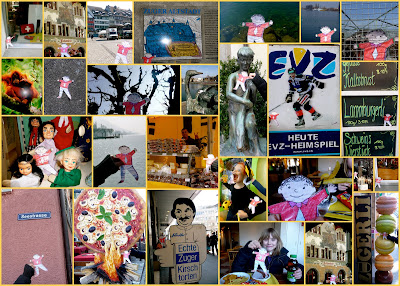