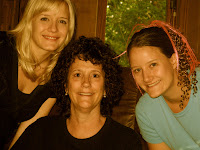 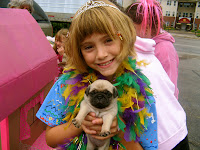 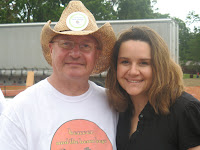 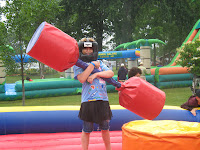 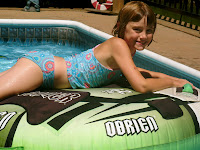 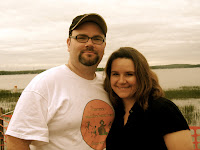 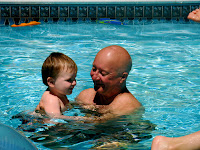 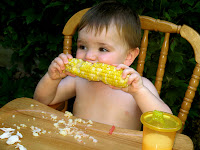 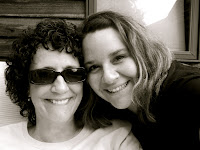 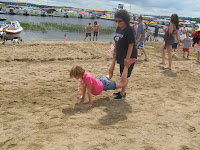 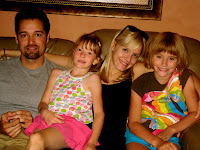 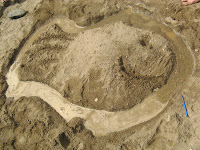 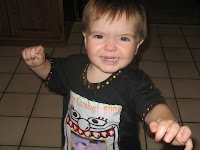 In fifteen days my family will be leaving for our new home in Huenenberg, Switzerland, so last week I went home to Detroit Lakes for a week to spend time with my family. This is always a great time to come home because the Water Carnival is going on and there are a lot of activities to do.

Usually my Mom works on this weekend, but this year she had it off and was able to enjoy these activities as well. Last year I remember that she had to leave early and walk home, work a full shift, and was so tired and felt she missed out on so much. It was nice to see her relaxing and having fun.

Other than a few scattered showers, the weather was perfect. A little humid, but nothing a jump in the pool can't cure! We also met Ryan's parents, Karen and Monte, down at the Chili Cook Off as well. It was great to see them and have them be part of this annual event. I think that they should definitely enter the bean bag toss next year!

Bridgette and I and the girls attended the talent show one night and our kids participated in the water fights as well. This is a nostalgic moment for Bridgette and I because we used to have a team for the Water Fights every year playing for Perkins.

Geno tried corn-on-the cob for the first time and absolutely loved it. He loved it so much that even after we ate the corn and were cleaning up, he snuck into the garbage, grabbed a cob, and hid in Grandma's room to eat more. It was quite funny!

Coretta, Geno, Emilia, and Jack enjoyed the sun, swimming in Grandma and Grandpa Earnest's pool, swinging, riding bike, and doing anything else that adventurous little kids like to do. They were completely inseparable all week and even had a couple of sleepovers at Auntie Bridgette's house.

Thursday Bridgette and I decided to venture out WITHOUT the kids for some sisterly bonding and went down to Zorbaz for the home brew and beer tasting. What we found were several beer distributors set up where you could sample different types of beers and they would tell you a little about each one. My favorite was Blue Moon Honeymoon. The cool thing was with a water carnival button you could sample beers for free from 7 pm until 10 pm. Needless to say it was a blast.

Erin, Ryan, and Nick came up on Friday night. The guys then went shopping for the ingredients for their chili for the competition the next day. Even though this is the second year entering and the second year losing, I have come to the assumption that the DL patrons do not have any taste because where I was sitting and tasting it was clearly the best there. We also were entered into the bean bag toss competition. Nick and I didn't do so well, but it was fun.

The grandchildren had a great time at the Kiddie Parade. They decided to dress up as the Wacky Water Carnival Cousins and created special T-shirts for the day. After the parade, we had a picnic lunch and the kids partook in several activities such as the inflatable water slide, the three legged race, sandcastle building, the potato sack and wheelbarrow races, as well as some inflatable contraption where you try to hit your opponent down gladiator style. Last year Erin and I did this and I won. This year Coretta did this and had a blast doing it!!

Nick and I were even able to sneak off for a walk and a 4 mile bike ride which was nice. I forget how peaceful and beautiful and quiet Detroit Lakes is. I also forgot how you can get anywhere by foot or bike. There really is no reason to have a car since you can get to everything so quickly by foot or bike.

Huenenberg Switzerland is about the same size as Detroit Lakes and I look forward to biking and walking everywhere. My Dad joked that when we do come back that I will want to move to Detroit Lakes.

Everyone seemed to enjoy riding Nick and my bikes while we were home. In fact, it even inspired my Mom to order her own bike online. She ordered the Electra Cruiser named Daisy and can hardly wait for it to come in.

This was a great time that created memories that will last a lifetime. I love you all!!
Posted by Unknown at 7:13 AM