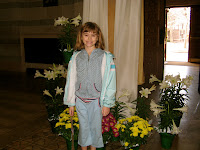 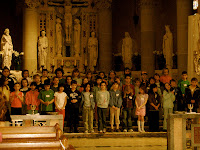 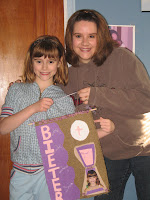 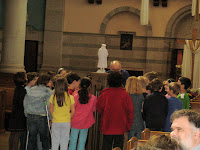 Today was Coretta's Holy Communion rehearsal and it went well. First, each child was told which pew to hang their banner from. Our family pew is the sixth row from the front. They then explained the ceremony and their role in it and had each child come up and taste the bread and the wine. Coretta did not like the wine very much at all. She had a sour look on her face. She asked me if the bread and wine would taste different after it was blessed and I said probably not.

Then, Father Joe came out and talked to them a little bit about how special this day is and even shared with us his rosary given to him from his parents on his holy communion in March 1960. He stated that he used it so frequently that he had wore it out, so they gave him another on his Confirmation day.

He then presented each child with their own rosary that glows in the dark in case they want to pray at night. He blessed them with holy water and passed them to each child. Here are some photos from the rehearsal. Tomorrow is the big day!!
Posted by Unknown at 11:50 AM